When the anti-GMO activists started up on the social media back in 2013, something in me drove me into action. I started off very cautiously with where I’d put my comments. The first place I ventured into was the online news site, Civil Beat.

I was pretty naive as to what my comments would do in there. Little did I realize that it led to dogpiling by the anti-GMO activists. Before long, people started to know me on there and I became labeled as a shill or a troll. The nightly ritual of combatting the misinformation there soon landed me a phone call from my dad.

My sister had told him I was commenting online and it would jeopardize our farm and family name. He called me up with my mom beside him and told me to stop what I was doing. In his voice, I didn’t hear a lot of confidence in what he was saying since he didn’t know much about the social media. As an obedient daughter, I listened and said okay.

I knew that something big would unfold from this movement and affect our farm. I changed my online name to avoid being seen as a Kamiya, as a request of my dad. My profile name became Joni Rose for the next several years. I couldn’t stop from wanting the truth to be heard.

I think about those times now and wonder what would’ve happened if I had quit speaking up. Would things have been better without our say in the social media war zone? From the environment it’s at now, my gut instinct says speaking up has changed the tone and helped to empower others to speak out.

Too many times, we are told to be quiet and say nothing because it will pass. To me, that’s like sticking one’s head in the sand and being willfully ignorant of the realities. Just let it pass and talk amongst yourselves to solve the problem! I’ve found it simply isn’t effective.

Years ago, women had to just take the cat calls and harassment from men because that’s just what men do. By not saying anything, it was helping to keep a man of stature from being embarrassed. If a woman did speak out, she was torn to shreds for “deserving it.”

It is the same when it came to domestic violence, where women were pretty much told to be quiet or you’ll embarrass the man. I was once a victim of domestic violence and felt ashamed to have to talk about it because it was acceptable for a man to lose his temper. I was dismissed for calling it out and it must’ve been my fault. I felt powerless against getting away from this until a friend told me that I should just leave, which is what I did.

Too many times, we are told to just be quiet about things. Don’t say anything bad about your husband because you shouldn’t embarrass him is yet another thing I’ve been told. If he loses his temper just keep it to yourself. If he doesn’t help you just talk to him and he will change. After 10 years, I’ve realized that talking doesn’t convert to action. So my next plan was speaking up openly about it. I could no longer hide from the realities.

Apparently to many, this was just shocking to hear. We all like the image of a happy family and happy couple. When you hear otherwise, it really changes that idea and almost causes cognitive dissonance. No, I do not have a perfect life and marriage and I can no longer live in an altered reality. The truth is sometimes unpleasant.

What became clear to me was that I wasn’t alone. So many friends started to speak up via messages about their own marriages and frustrations. I saw a different reality behind those smiling photos of a life just like mine. I wasn’t alone.

The more I spoke our openly on my observations and frustrations, others commented on how they too saw the same issues. What my husband thought was okay became a reality that what he chose to do wasn’t okay. This eventually has led to a major behavior shift that losing one’s temper wasn’t acceptable. The temper tantrums have decreased and we are getting along much better as a result. It’s not perfect but I’m demanding for change and won’t stop until it happens. The only way for someone to change is to recognize the issue. It is a painful process but that is life.

Sometimes people don’t want to hear what you have to say but if you speak with truth, truth will prevail. Many will discourage you to speak the truth to hide the ugly reality but it will come out. Change can only happen when it’s recognized and someone has to take the big step of speaking up.

If you have something to say, say it. If you’re dealing with mental illness, talk about it. Times are changing where more people need to stand up for themselves in truth.

We are humans and our lives aren’t perfect. Once you speak up, you may find a wonderful community of support willing to help you find peace.

As a kid, I was taught the lesson to treat everyone fairly. It was bad to tease others by calling them names and using derogatory terms. Apparently, when you grow up to be an adult, that rule disappears.

Esteemed professors and even “leaders” are unaware of the insults they throw out that are very elitist and dehumanizing. 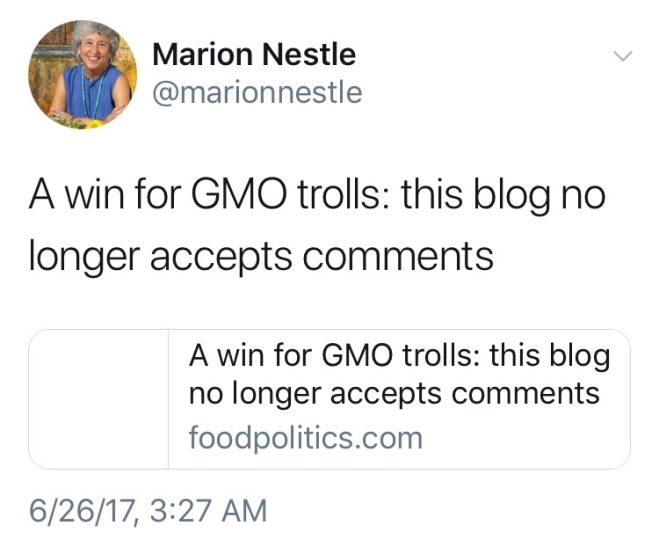 As I’ve stated over and over, I have never worked for any ag corporations or any biotech company at all, but when faced with facts, these people seem to resort to ad hominem attacks. To them, I must be lesser or a human and easily dismissed.

This is what bothers me the most about the organic industry’s tactics to use fear but when called out on it, they pull out the shill or troll card. They take full advantage of ignorance to make people feel bad for buying that GMO food as if it’s a lesser kind. It’s mean to manipulate a person’s emotion to get a sale on something that really isn’t better for the environment or healthier.

The insulting attitudes of the organic supporters is telling of the reality of this marketing scheme. It really is about the well-fed, wealthy white person dictating to the public what they should and shouldn’t eat. Just look at the Stonyfield commercial using young white girls touting unfounded claims.

I’ve been saying this for years that it’s becoming clearer that the organic industry must be finding it increasingly more difficult to sell products based on its own merits. If they keep resorting to fear to get people pay more, there’s a reason for it.

When I stopped at the market today, that became all too evident. There were 2 kinds of Romaine lettuce being sold. One could pay $2.89 for a huge head of conventional kind or 3 small heads that was a third of the size of the single head of organic lettuce for $3.69. This example shows clearly how it will take more land to grow those organic heads just by a side to side comparison.

Most consumers will shop price first which is likely why the organic variety wasn’t moving as fast and was browning at the stems and outer leaves.

Those who continue to politicize the ag issue have very shaky stances not based in evidence. Like Sen. Josh Green, Rep. Kaniela Ing, and even Dr. Marion Nestle resorting to the shill accusations, that is all they have left to cover themselves with. Though it’s far from the truth, they want their followers to not think about what’s being said and close minds to thinking. It’s the same reason why the organic activists rely on fear. It’s effective at stopping critical thinking.

Some people shop on impulse and don’t think about it. Others look carefully at the product and compare quality and prices. That requires thinking skills, which one should never turn off when going online.

The Hawaii State Legislature is once again politicizing the GMO issue and conflating it with pesticides. I’d honestly wish they’d get a clue that 5 years of battling and pandering to elites isn’t helping anyone when they don’t operate on facts. If they’d spend more time on growing more farmers and paying attention to those on the land, we might actually get closer to a real goal of achieving self-sufficiency. Isn’t that the common ground needed already?