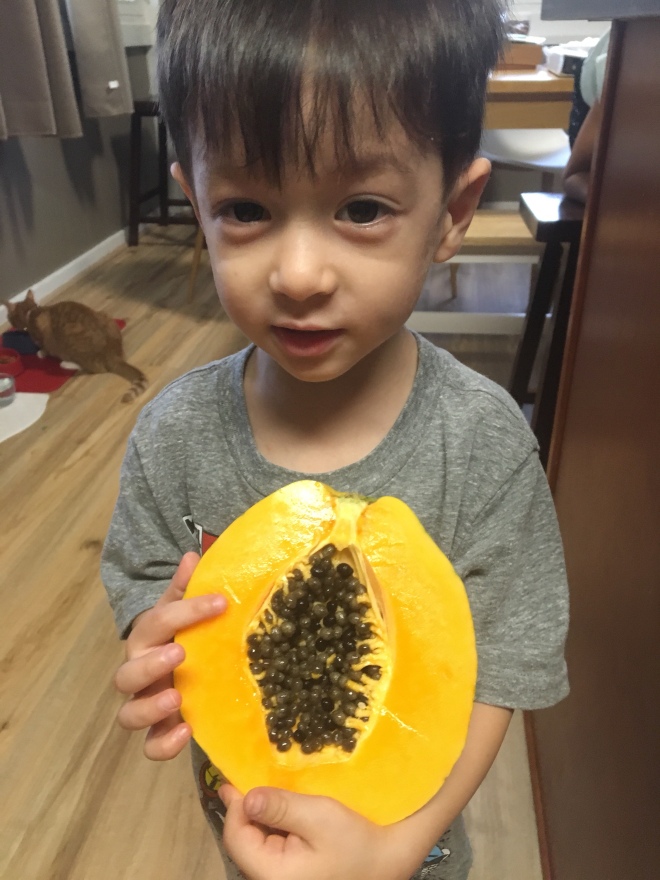 The people of Hawaii love papayas. It is a major staple for generations of families here. Many consider it to be the equivalent of the banana on the breakfast table. If bananas were gone, few would know what could be a suitable replacement. That is the reason why the papaya was saved through technology for the people of Hawaii.

The papaya has also helped so many farming families stay in farming. The papaya ringspot virus ravaged so many farmers who were forced to change occupations. Once they stopped farming, many left those fields never to return.

My dad came so close to losing everything. He worked long hours at his day job then worked even more hours on the farm. He was determined to do both jobs to support the family. I only learned recently why he chose that path.

He knew that the farm held many life lessons of working together and staying focused on quality work. Those two values were taught to him by his father and mother. He wanted me and my siblings to learn that on the farm because it would stay with us forever.

Many times, the farm didn’t make money but we were told we had to work to support the family. We learned how to persevere through long hours and the beating hot sun. There was no giving up because people depended upon us. That lesson is stuck in my mind that nothing is as hard as the physical labor needed to grow food. As a result, I am always appreciative for what I have in my life.

My dad is living his dream by farming and seeing my brother learn the ropes. His hands are stiffening up at the end of the day and sometimes he has a sore back. I see him limping from time to time but it doesn’t stop him. He still goes on with his work and beams when happy customers send their appreciation for the fruits of his labor.

A farmer has raised a family on the farm and planted the seeds of success in his children. The farm has changed over the years through new ways of growing crops and using modern technology, but the lessons learned are the same. It takes a lot of hard work and grit to be a farmer. That lesson has to be passed on to each generation in order to sustain family farms.

The Hawaii papaya story has helped to sustain our family through 3 generations. This high tech fruit has fed millions of people for over 20 years. It is GMO technology feeding people!

People around the world can learn from what happened to us where we can rise up from devastation. One plant disease or major weather event can end a farmer’s livelihood. If we want more farmers being successful, we need to support the science that can help them reach those goals.

The Hawaii papaya story is one of hopes and dreams for future. If we had lost access to this technology, our family farm would be gone and only 2 generations would have experienced farming. Farmers’ success is dependent upon our ability to adapt and anticipate change. We can’t let fear block opportunities and stymie success.

Do we want people to succeed in life? Do we want generations to thrive? If so, we need to give people tools like food. Without food, the human potential will never reach its peak.

Let’s keep giving to people across the world. Keep speaking loudly about the Hawaii papaya story so they can benefit from it. A full life is what each and every human deserves.

I work with elderly people as my day job. I see firsthand the effects of aging everyday. So many people tell me how they used be so tall and have lost several inches as they aged. Not only do I see people who have lost height, but I see people with severely bent over or curved spines.

The spine is the body’s support structure that keeps us upright and maintains how we function. Once there are permanent changes to this system, the person’s abilities is altered. The long term damage results in disability and suffering.

With the recent passage of the anti-pesticide bills in our legislature, I received messages and emails from certain legislators apologizing for voting for this. I was told that a no vote would not have mattered so they had to vote yes. I also was told that I didn’t understand the politics behind this passage. I appreciated the emails with the rationale but am very much saddened by the message sent with this vote.

I remember as a kid how honorable it was to visit a legislator at the State Capitol. It was like visiting a local celebrity when you’re 12. I saw them as great people and a leader to look up to. Fast forward to the present and I honestly have a hard time wanting to call several of them honorable.

In my mind, the legislators have a duty to the public to use resources wisely for all constituents. They are the backbone of our community who have chosen to lead people in the right direction. Unfortunately, the last 5 years have shown me otherwise.

Many leaders are abusing that spine with politicking and damaging the integrity of our communities. Instead of looking at the real issues around pesticides, they choose to listen to the DC lobbyists’ tales. The evidence shows homeowners misusing pesticides and even immigrant farmers not properly applying it. So instead of addressing these issues in a bill, they choose to ban a pesticide, chlorpyrifos, used in many sweet potato farms for killing weevil infestations. Who cares if this weevil can destroy up to 97% of their crops and there’s no evidence of misuse by them?!The politicians need to be a hero so forget consequences! They’ve attacked the most regulated user instead of the problem ones.

The message sent to the public gives the perception that farmers are the bad guys and legislators are flying in with the saviors to rescue us. I’d really appreciate a public education campaign to get homeowners educated since there’s more of them than farmers. The layperson fears farmers but don’t realize that their neighbor may be the real culprit.

With the recent incident where pesticides are being used to kill prawns in Hawaii streams, the environmental groups remain eerily silent on it. If they were to make noise about the pesticide usage by a layperson, it may start to get people thinking that farmers aren’t the only users! That would create curiosity about the claims made and likely chip at their credibility and fundraising.

By not standing tall for what is needed, our legislators have damaged their own credibility in my eyes. Many have written messages of support to me over the years. I no longer view them as honorable given the politics behind the passage. It is no wonder what many aren’t seen as up and up leaders. Their actions show us a person with no backbone to stand up for what is right. The public sees them as old crooked and bent people who can’t stand tall anymore. That image only gets worse each year and faith in our public servants go down.

When the want-to-be politician stopped at my house a few weeks ago, he gave me the “I support farmers” spiel but then plans on building a school on farm land. Then I asked him what he will do about the anti-pesticide issue should a law be passed. His idea was get parents to sign a waiver and everything will be fine. He was clueless about what was happening to agriculture!

No, Mr. Scot Matayoshi, as a lawyer, you should know that waivers like those are not going to work. A parent can’t sign away a child’s right and it’s simplistic to think that. Any new law that comes into effect can change the legality of the waiver. In a typical politician way, he talks the talk but operates from incorrect assumptions. Maybe that is why he is suited perfectly for Hawaii politics as he is another without a backbone. To tell me that he supports farms but intends to build on it is two-faced. 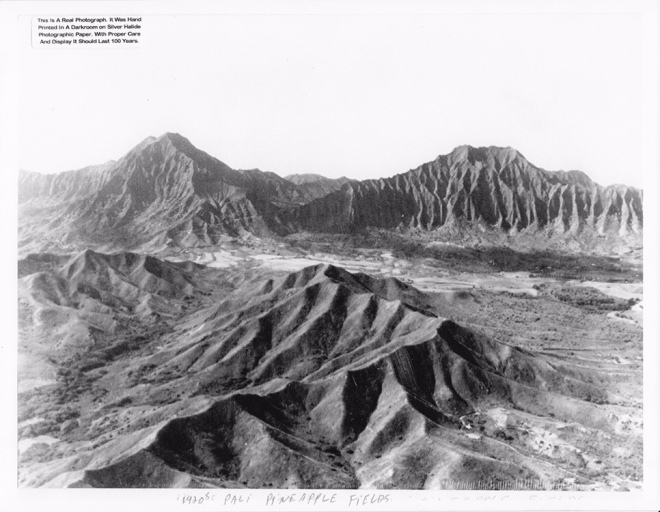 A long time ago, this is what Kaneohe looked like. 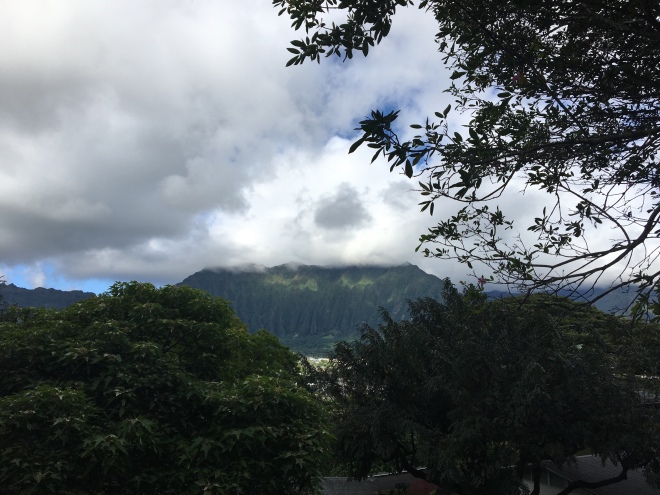 From a similar view, this is Kaneohe today, full of homes. I know that it’s inevitable development will happen. When farms are gone, they are gone forever. What farms are left are now battling for support of our leaders but getting little actual action. It’s a message that maybe farms are going to be gone sooner than we realize.

If the community wants farms, then we need leaders with a backbone now. When one has a straight backbone, one can functional at his maximal potential. If one allows their backbone to be attacked and bent, their appearance and function will be altered permanently. We need people willing to stand tall for what is right for once. Who will that be? 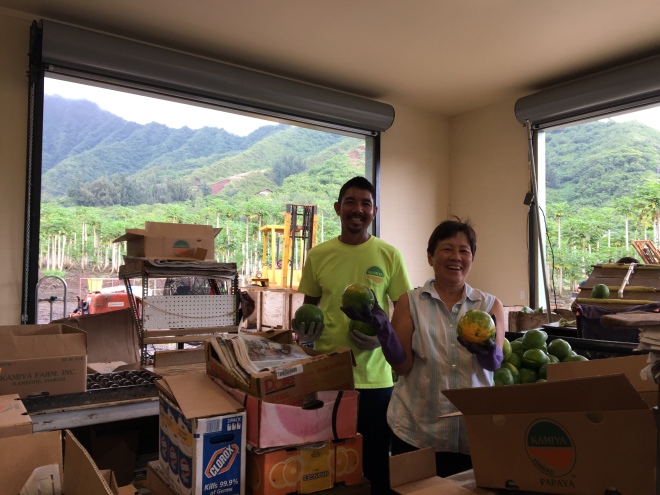