Growing up as a kid and having to work on the farm, it is easy to not appreciate the things you have until you’re older.  As a kid, I hated having to wake up early on the weekends to go down to the farm.  We never had the chance to lounge around watch cartoons in the mornings.  I used to think that this was so unfair that we were the only kids who couldn’t do this.  It was like drudgery every weekend to know that we were the workers.  From the time I was about 8 until I was well into my twenties, it was working on the farm at least once a week.  Even during the summers it was working for me and my siblings.  The work got easier when we realized that we could negotiate being paid.

My parents always taught us that if we ever wanted something, we had to earn it fair and square.  You couldn’t make deals with them if you wanted that new cassette tape of Wham! or Madonna.  If you wanted it, you had to work.  There was no other option to them.  We did learn that grandma and grandpa were great ways to just get things easer though.

Well, you can bet that as a teenager, when I had the first opportunity to get a job elsewhere, they were all for it.  It felt great to not be working in the fields, or in the shed processing papayas for hours.  To scoop ice cream in an air conditioned mall and decorate cakes was fun!  The work was way easier than the farm any day.  I was happy to be free as teen and later as a college kid.

As I step back, my views of the farm have changed now that I have children.  I realize that as much as I hated working on the farm, I truly had the best childhood growing up and an amazing farmer father.  He was a tough guy as a dad and very strict but the lessons I learned stick with me to this day.  He may have officially retired from his regular job, but he still works more than 40 hours a week doing what he loves the most:  farming and agriculture.  His family always comes first but those are his other true passions in life.

His own early lessons in life helped to build his values to what they are.  My dad grew up very poor.  His dad was a dairyman and farmer himself.  He spent his childhood playing around in the dump searching for handy reusable trinkets or other recyclables.  His way of recycling would put the modern day green person to shame.  They reused everything and saved many things.  He has some of the same tools that his father used on the farm that is still usable to this day, some 60 years later.  Talk about durable! 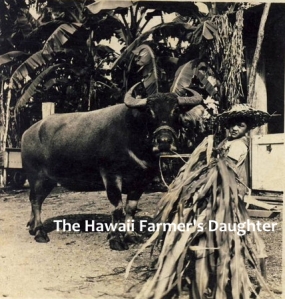 As a farmer’s kid himself, at a young age, he learned the ropes of how to do everything.  He could ride a water buffalo to use it to plow fields, tie knots of every kind, drive any vehicle, and fix it too.  He was always tinkering. Later when he realized that the military could give him an education and other skills that also shaped his life.  Soon he was in Vietnam fixing aircraft in the Air Force also.  Those experiences gave him the skills to do practically anything, which he indeed does.

My dad is unbelievably skilled at nearly everything which is no understatement.  He rigged up his own tractor to become a forklift, welded the picking platform, built bins, built the shed and processing portions, plows, drives a backhoe to dig up stuff or uses a bulldozer to grade the land, can diagnose plant pests and diseases, knows how much and when to fertilize the fields, lays out drip lines and irrigation systems, knows which cover crops to grow and when to plow them in, delivers and packs the fruits and can instantly spot a ripe one from 10 feet below, hauls 50 lb. boxes of fruit several hours a day, knows how to control any weed and what to treat it with, knows almost every kind of plant there is to know and how to grow it, can reuse old fence posts to build a new fence, fix big rigs and trailers as well as park those things, can maneuver in the tightest of spots in Chinatown when delivering the fruits, and so many more skills that I could not list.

Farmers like my dad and others across the world are truly amazing people.  Until you know one personally and see exactly what they do and how they do it year after year, you can appreciate the depth and dedication that these people live and breathe each day.  Farmers were considered one of the noblest of professions which should still indeed ring true today.

In the words of Thomas Jefferson:

“Agriculture is our wisest pursuit, because it will in the end contribute most to real wealth, good morals, and happiness.”

One thought on “What can a Farmer do?”