My mind is always thinking about things, reading, learning about what’s going on, etc.  It’s always busy.  I even dream about some of the issues that go on in Hawaii.  The other night, I had a crazy, innovative thought that might really solve a lot of problems with agriculture in Hawaii.  Read on…

Remember this poll on the Star Advertiser a few weeks ago?

Note that these polls aren’t too reliable for multiple reasons, but the fact that homelessness is a top priority on the minds of the voters is telling.  No one can ignore the fact that there are homeless everywhere throughout our entire state and it’s an eye sore as well as saddening.

In the practice of occupational therapy, we know that by engaging in meaningful activity, we can restore well being physically and mentally.  As I watch many of these folks, they appear to be functionally doing pretty well.  I see them lowering themselves down to the sidewalk, laying down on it and getting up with ease much of the time.  Some of them can pace back and forth on highway medians begging for money for hours.  Others are able to squat down for hours outside of public places looking for handouts.  There is a lot of meaningless human energy here being wasted that could really be converted into meaningful work like being on a farm and growing food.  Voila!

Why not create a community based program that combines these two issues: growing food and homelessness. For one, you’d get people off of the street and into some form of meaningful activity and work.  They could work on a farm growing food as well as have a roof over their heads.  These people will be able to receive treatment for their conditions as well as not be an eyesore in public places.  They would also be doing something good for others and themselves by growing food.  That’s beautiful to me and I know it works based from my own experiences.

As a Star Advertiser Off the News post today said, we should end the food fight, and they are right.  Rep. Jessica Wooley wants more people to grow food and to keep agricultural lands in farming, while others want to take care of the homelessness problem here.  Let’s give Rep. Wooley her farms and walk the talk by doing what she proposes to do with it.  Then other’s like Rep. Tom Brower don’t have to get frustrated with the carts and homeless people all over his district.

From an email sent out by Jessica Wooley’s camp showing how she thinks biotech is only about the agribusiness companies.  Note that HB147 is about firearms and not about GMOs.

We all know that Rep. Wooley isn’t a local person when she only stands for the activists and their demand to only go organic.  Local style is to take all sides and work together and come to an understanding and a plan.  As she states in her letter, she doesn’t like the “status quo.” You might not like how we do things here, but you can’t just come in and tear our livelihoods apart the way your activists demand.  It’s also too bad that other locals like Rep. Kaniela Ing have jumped on this fighting attitude.  That’s not the way we do things local style.  This is our Hawaii as much it is yours, but to point a finger at us law abiding family farms is basically standing on our yards telling us how to farm.  I don’t like this and many others too.  Your letter refers to fighting, and we don’t like to fight but are forced to.

Let the farmers farm, and go start up your small sustainable farms in the country.  Do your job for agriculture and work collaboratively for the sake of everyone involved.  Be creative in your plan, not just worried about your way or the highway attitude.  Take care of people too, including the homelessness by coordinating with other committees and do it.

The farmers have had enough of your activists attacks and here’s a way to give them what they want.  The attitude needs to change from “only organic” to “how can we solve this problem together.”  I ask that we end the fight now and actually do something purposeful with your talks about growing food and be that leader to stop the attacks against the biotech farmers big and small.  The bottom line is that we need all forms of agriculture. 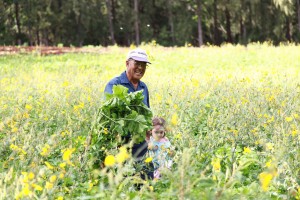 Live, eat, and drink farming rather than continuing to legislate what you don’t know on, and see a whole different side of the picture.  Take the path that will lead to helping people based upon evidence for it is better than leading us into a war.  That’s what a true leader would do.  Can you be that true leader and work with everyone?