Once again, there is an upcoming anti-GMO concert party going to happen on Kauai.  This poster is going around the social media right now touting this event.  This is the hip thing to do in our islands, have a big old shin dig. 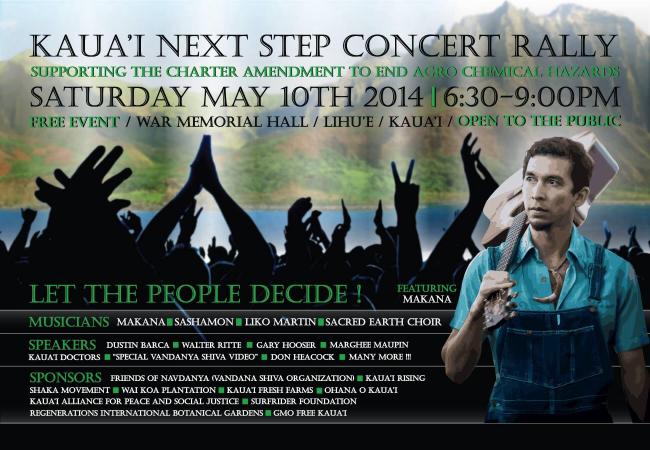 Once again the lack of awareness of these activists are glaring.  There’s Makana with his GMO cotton overalls and cotton GMO aloha shirt with a guitar that is coated with chemicals.  He tries to look as if he is a farmer that is speaking for farmers but in reality, is just a musician.  He’s the idol of the GMO Free crowd right now so its time to keep the iron hot!

This concert will likely have high tech devices like speakers and instruments that were made by a multinational corporation but they will scream in horror of their alleged atrocities.

They flying in people like Vandana Shiva from around the world who’s job it is to scare and outrightly disinform people.  Forget the fact that she’s not coming here on a home made wooden boat from India.  She’s a jet setter traveling all around the world and corporate made high tech planes that guzzle tons of synthetic, earth polluting jet fuels.  She wants to save the world with her message of being green is good and use lots of GMO guzzling cars to get to these concerts.  She’s out to save the world while polluting the earth.

The concert attendees are earth lovers who wave their hands with peace and love for they are doing the aina a favor.  All the meanwhile they are using oil burning power to dance, sing, and party.  They eat and drink from corporate made beers or foods that were brought in on gas powered ships to feed the people for that day.  The majority of what they consume likely is GMO and they aren’t choking on it that day.

Tens of thousands of dollars and hundreds of human energy are joined in that one spot for several hours socializing and reinforcing their beliefs about this Hawaiian sounding movement.  They are bonded by this need to save the earth from the poisoners of the world but then don’t even realize their own poisoning of the world.

Tons of trash created by food containers, beverages, and posters fill up the dumpsters that fill our landfills on the island.  It piles on the same trash that was created from all the Bill 2491 hearings and the labeling bills.  The multiple marches held throughout the year is also buried in the trash mound too, and leeching into the aina.

The sewage created by this gathering is also enormous.  It all goes into that fossil fuel powered sewer systems to be processed to save the land from toxic human waste.  These people are worried about their water systems but don’t worry about their own impacts on water either when they gather together.

The concert will eventually end and lots of photos and videos of this momentous event will fill the corporate owned social media sites like Facebook and YouTube.  These people yearn for the “old days” where things were so much better but will never forget to bring their latest corporate made IPhones or smartphones.  Without this high technology, these activists are lost but they still refuse to accept the “evil” ways of modern day farming.

After all is said and done and all the human energy is expended, was there truly a positive impact from what they did?  Was there a piece of the aina cleaned that day to keep sea life healthy?  Were human lives saved by spending half a day at a concert? Will people be fed sustainably by this day? Did they work towards making Hawaii more food secure?  Was the money spent going to last towards a greater cause to actually help farmers keep farming?

Like the transient nature of a concert, so are the actions of these activists.  The current fad is to be anti-GMO right now.  Forget about the long term consequences of what they re asking for because they can’t see beyond the next concert.  They will still go on wearing the textiles that they protest and buy the food and fuel that they fear but acknowledge consuming.  They cry, “Let the people decide,” and don’t even realize what they reap the rewards of in their own lives once again.

One thought on “And They Cry, “Let the People Decide!””