The Maui County Moratorium is now the forefront of the anti-GMO movement once again and I’m seeing the typical pattern of comments from the anti-GMO activists being spewed all over the internet again.  Here’s some of the latest ones being posted from a recent Civil Beat article.

Why is fear filled statements so prevalent in the conversations lately?  Why are so many people feeling as if they are being sprayed or poisoned but continue to stay within the area despite the so called danger?  They know the truth but are willing to bend the truth to their advantage in the name of hobby activism and it’s bad news.

I’ve decided to look further about why fear is so prevalent in the conversations in Hawaii to get a better understanding of why it has taken root here.

The Anatomy of Fear

This is the definition of fear from Wikipedia.  Note the keyword here is “belief.”  Fear is the the belief that someone or something is dangerous or bad for you.  It doesn’t necessarily mean that it indeed is bad but one is believing that it is.

A good example of this is my grandmother’s fear of worms.  As a young girl, she was always afraid of it and it remained a part of her belief system well into her old age.  She had neither been harmed by them and nor could they really harm her but it was an entrenched belief that she had.  Even if the worm was made of Play Doh and fake, it still sent shivers down her spine and sent her screaming.  So why do people persistently maintain fears like this even if it is completely unfounded?

From the website HowStuffWorks, fear is really our brain’s chain reaction of events also known as the fight or flight response.  The article goes into full detail on how fear is created in our minds.  It is really an unconscious series of events that occur in our brains.  One is the low road which is the “quick and messy” response and the other is the high road where more time is taken with a more calculated precise response of the interpretation.

Translating this into the current issue at hand, we can see that fear is clearly being used by the activists here.  Lots of internet posts are being touted and the immediate response is to be afraid of the this technology after reading an article or seeing a scary memes on Facebook. 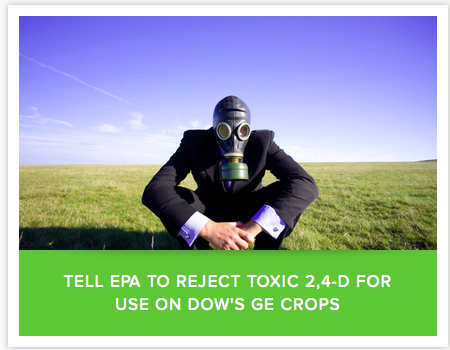 From the Center for Food Safety website of a well suited lawyer in a gas mask.  Scary imagery indeed.

Homemade gas masks from the Babes Against Biotech page.

People are being made afraid at every single encounter they are hit with, whether it be the media or at a march, fear is the predominant theme of the anti-GMO movement.  Their immediate reaction is the maintain the low road of avoid it at all costs because it is believed to be dangerous and harmful.  Note that they “believe” that it is a danger and when reinforced over and over by politicians like Gary Hooser and his tirades, it becomes a reality to many of them.  When the majority of people lack a good understanding of the history of agriculture and have a little to know science knowledge, this makes for a large population to be susceptible to this kind of tactic.

Two years ago, the target issue was that GMOs were dangerous.  When study after study got debunked, the activists had a hard time using that argument and it shifted to GMOs are pesticides are dangerous.  Ashley Lukens of the Hawaii Center for Food Safety was quoted in a recent Civil Beat article stating, “In Hawaii, the issue of genetic engineering is an issue about pesticides.”  So does Ms. Lukens think that it means something else is other parts of the world when they are also engineering plants to fight bugs for the same reason?  Of course, she’s a PhD in political science trying to tell the agricultural community how to farm and what to use.  (It’s no different than the carpenter telling a nurse what to do in a bigger sense.)

When fear has become deeply entrenched the into the brains of many of the activists, it’s no longer about reason and logic.  It’s about protecting themselves from this perceived harm.  Presenting any type of evidence such as water tests, residue tests, and other data will not change the primitive neurological paths of fear developed in their minds.  The Department of Health can do a million of tests and still not find any data to support their beliefs, but they will continue to believe in this danger.  It’s ingrained into their minds already and no logic or reasonable discussion can change that, ever.  Fear has been an effective emotion that binds so many people together in this “movement.”

Their high road response this created fear is to now become activists and fight it within their GMO free groups and rallies.  This is the calculated, supposedly well thought of response to combatting this belief that they are being harmed.  These activists will easily use conspiracy theories, chemtrail beliefs, a misunderstanding of medical conditions and illnesses, and bumble up correlation and causation to justify their actions.  When put to the test in the court of law however, there must be proof beyond a reasonable doubt presented in order to support the reasoning, which the activists’ facts will falter when scrutinized.  Fear also turns people into ugly emotional people, who are unable to see the consequences of their actions as there are made to feel as if there is not other choice in the matter.  You can’t reason or bring these people out of the swimming pool of fear that they are stuck in.

Decontructioning Fear To Save Our Communities

I’ve been in a many discussions online with others and have seen a clear pattern among the anti-GMO activists.  When presenting factual information and questioning their links, if they are not able to refute it, one will get blocked and banned by them.  I’ve been banned from the Babes Against Biotech page for pointing out that organic pesticides can be dangerous to bees, and from the Hawaii GMO Justice Coalition page for asking the death threats to stop.  I was even blocked and banned by a politician wannabe, Kent Fonoimoana, for pointing out how environmentalist groups are trying to block farmers from farming.  Challenging an anti-GMO activist to look further about the issue gets most people instant, “I don’t want to talk to you anymore.”  It shows how unreasonable they are about discussions and dialogue which is not what we need in Hawaii.  I’ve never posted anything heinous or threatened anything, and just simply questioned their logic and reasoning for their stances and bam, I get blocked or called a bully.  Forget the fact that I get nasty emails or comments on this blog which I refuse to allow.  It’s clear that people who align with this “movement” are not about discussions or are ready to be questioned on some of their stances.  They want one thing alone and that is all their seeking.

These outside activists have even gone as far as trying to infiltrate our agricultural communities by bringing in their fellow Filipinos to try and split them apart.  Here’s a flier that was posted around the internet to demonstrate this.

Note the funding on the flyer indicates that it’s all mainland funded groups like the Ceres Trust, PANNA, PANAP, and the Hawaii Center for Food Safety, who provide more outside non-profit money to the local sounding, Hawaii SEED.  Their goal? Tear communities apart and take apart agriculture in Hawaii!

The same motives apply to the SHAKA movement, who disingenuously claims they want safety studies before the agribusinesses can farm.  Why do so many of these members also belong to GMO free groups?!  Their true intent is clear when you research it further and it is unacceptable to me to use fear, false intentions, and misinformation to tear apart our Hawaii communities.  None of these groups are about living together as they don’t care and nor do the funders of these people care because they are living off in Washington, D.C. and the San Francisco having a ball seeing our communities being torn apart. That may be the mainland way, but it sure isn’t the Hawaii way.

What’s even more disturbing about the SHAKA movement is how many of these people said that they will replace the lost jobs with “organic, sustainable farm jobs.” When it’s pointed out that organic farming only provides 1% of Hawaii’s food, the response changes so quickly.  The activists cover themselves up with, well, these people can go on welfare, which is an acceptable solution for our communities to them.  People with real jobs and families do not want to live on welfare and why is an outside person dictating that to our local folks?!

Maui County Council member, Stacey Crivello, pointed out a sad fact in a recent news article on Maui News of what happens when activism succeeds in our islands.  When Walter Ritte’s antics managed to get Molokai Ranch closed, hundreds of people lost their jobs and their homes to foreclosure.  Others came in and bought up these homes at foreclosure prices and the original owners became tenants in their own homes.  That definitely is the breaking of the human spirit that Stacy Crivello mentioned in her commentary.  People dream of one day owning a home that comes through handwork and dedication and it will all be lost when a bad law is passed.

The anti-GMO movement in Hawaii has become one of manipulation of people’s fear and repetitive misinformation campaigns to tear apart “the companies.”  However, upon deeper inspection, it’s not tearing their intended target apart, the reality is that it’s tearing our families and communities apart.  It’s not about facts, logic, or reasoning either.  We are slowly eroding at the very essence of Hawaii that brought us together to begin with, bit by bit, piece by piece.

I see it the issue like a haku lei that has so many distinct component in it that put all together make it beautiful.  If we keep picking it apart and try to put only one item in it, is it going to be as beautiful and diverse as when it was first put together?  No.  We need all parts of the lei, from the big dendrobium, to the ti leaves, ferns, baby breaths, lokelani blossoms, and the very core of raffia that it sits on to be that beautiful lei.  If we remove the core that supports the pieces, we will have nothing left to work with and our lei will just sit in pieces.

That’s exactly what is happening to our Hawaii communities with outside activism attempting to rip out the very base of agriculture in our state.  If we as the public allow this to happen, we will not be able to have a working and functioning system to build upon.  Like the haku lei with no raffia or ti leaf as its binder, the whole lei will be nothing but bit and pieces of flowers and greenery that is now wearable or as beautiful.  That is not a reflection of the diversity of our Hawaii agricultural communities.  Mainland based activism isn’t able to see the very foundation of our heritage of this “local style” and are ready and willing to destroy it in any form and fashion.  I will not standby and let this happen and nor should anyone else.

2 thoughts on “Fear: The Deconstruction of Local Culture”