Several months ago, I became aware of the Washington, D.C. based Center for Food Safety arriving in town.  I wrote a post about this activist group when I saw it posted on the Kanu Hawaii site.  They are now here in our islands to try and bring their mainland influences to our smaller communities and it’s clear what their true agenda really is again.

Here’s a flier that was sent out in to people in the Kaneohe/Kahaluu area by the Center for Food Safety just a few days ago.  My entire family members are long time residents there for over 60 years now and seeing this arrive in our mailboxes did not please us at all. 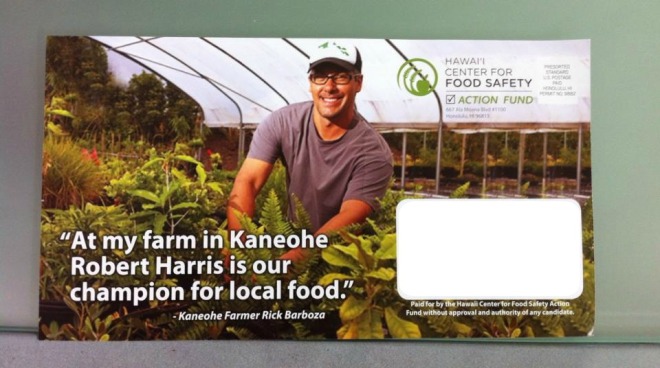 It’s not surprising at all that HCFS is supporting Harris, who is the executive director of the very anti-biotech group, the Sierra Club.  He was also a proponent of supporting Jessica Wooley in getting her the House of Representatives seat several years ago.  Now he is seeking to fill that seat with his mainland style activists’ values with a mailer from the HCFS.

He also sent me a message about a month ago regarding his candidacy.  I’m guessing he has read my criticisms of where he stands as a political leader in all of this. 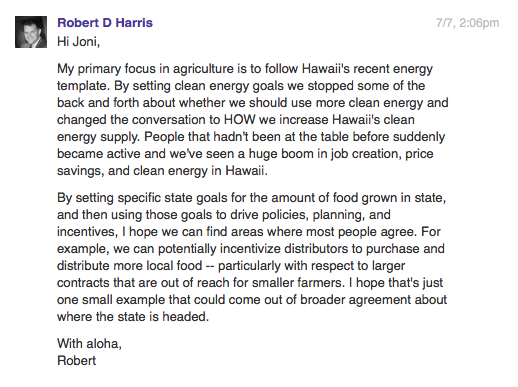 It’s great that he wants to talk about growing more food and working together for better policies.  So my response to him was this.

Well, I was so hoping for a response to my question but never got it.  I’m starting think that these politicians are really not about working together when they openly support groups like the Center for Food Safety and Earthjustice, who have a single agenda for Hawaii, which is to use scare tactics to take away agricultural tools from farmers and ranchers.  They are lawyers and environmentalists, not farmers or business owners and they don’t know our history in Hawaii, yet they are willing to come and take over the conversations.

I find the flyer quite amazingly misleading which is of no surprise when it comes from activist groups who are always misinforming the public.  Here’s the blunders I found on those mailers.

The Sierra Club that Harris supports is against biotechnology so knowing that connection, he’s definitely against the papaya farmers and ranchers in our islands who have used this technology for 20 years.  How can you say you’re a champion of the local farmers when you work for a group that opposes their practices?  There’s several farmers in his district that he apparently are not aware of that he forgot to talk to.

The Sierra Club has a legal arm known as Earthjustice that they use to enact lawsuits in the name of environmentalism and later use it to funnel cash into their coffers.  It’s basically a money making operation of the Sierra Club.  If they are willing to protect agricultural lands, why has Earthjustice and the Center for Food Safety trying to join the lawsuit against Big Island farmers?  Not only is Earthjustice suing on the Big Island, but they have also joined the lawsuit in Kauai against the seed companies.  If they are about protecting agricultural lands, why are they fighting the people who are using it to farm? If they about helping Hawaii, why are they suing the smallest farmers anyways?

Third Blunder: Protect your right to know what is in your food

Once again, the disingenuous “right to know” argument enters the picture.  That’s the fighting cry of the activists like Naomi Carmona and her Babes Against Biotech crew.  She and other activists don’t care about the “right to know,” for if they did, they wouldn’t join groups that are GMO free.  Well, we all know the truth about these claims for the activists clearly put it out there for all to see.  They also want the 1.3 million Hawaii folks to endure increased costs associated with labeling which will really help all local people make a living here.  These activists don’t seem to realize that they have a label called organic and GMO free but are willing to burden everyone for their disingenuous claims.

Fourth Blunder: Will protect our homes, schools, and hospitals from dangerous pesticides

First of all, Kaneohe has very few farms, let alone GMO farms to begin with.  Ashley Lukens, a political science doctorate, seems made a erroneous statement on a CB article stating that, “The issue of genetic engineering in Hawaii is an issue of pesticides.” (It’s always the non-farmers who are quick to spread their pseudo-expertise about how and what farmers should farm.) The farms are out in the more rural areas and homes are far apart there and the farmers themselves live on the same property and are small.  Many have been there for decades with no report of illness at all.  None of these farmers waste anything for that matter and only use what is needed and to assume that they all use dangerous pesticides is so wrong at every level.

Ms. Lukens doesn’t realize that Hawaii people live in a tropical environment that bugs and pests thrive.  Shall we forgo the termite treatments, fly traps, ant sprays, roach treatments, rat bait traps and allow pests to invade our homes, schools, and hospitals.  What even more interesting is that the district that Robert Harris is seeking to represent doesn’t even have a hospital in it!  Kaneohe is a completely different town and they obviously haven’t figured it out.

This statement on this flyer clearly shows the Hawaii Center for Food Safety’s fear mongering messages.  They don’t live here in our community and it shows.

Blunder Five: “At my farm in Kaneohe, Robert Harris is a champion for local food.”

Many of my friends and family who received this card look at the farmer in the photo and said, “Who’s that?”  No one seems to know who this farmer really was.  Turns out Rick Barboza isn’t a food grower but a Hawaiian native plant grower in Kaneohe.  Apparently, the Center for Food Safety and Robert Harris himself didn’t bother to talk to the long time food growers in his district.  If Harris is going to support local food being grown, how come he didn’t come talk to some of the long time growers in the area?  Shouldn’t he have a photo of a farmer of that person who is actually doing the work to grow food?  I would think so but the message is clear, they are not about including these others in the conversations apparently.  They have their own mainland agenda and aren’t going to include the local people.

It’s interesting that the Center for Food Safety did not put a non-food producing farmer on their mailer.  Last year, then Representative Wooley made a presentation to the Kaneohe Neighborhood Board that she was planning on redefining agriculture as the growing of food.  They must have changed their tune to the politicians as they are putting a non-food growing farmer on there.

What’s also telling about Harris’ agenda is that we can’t forget about the Sierra Club’s smear campaign against Pono Chong back in 2012 where they set up a site called NotPono.com and sent out fliers that led to his defeat.  Local boy Pono Chong was ousted for supporting the developers and construction jobs that so many of our family members and friends hold in our communities.  Who’s gonna provide and build affordable housing and jobs for these folks?  The Sierra Club?!  As we can see now, they are about taking things aways.

What the Fliers Should Look Like if People Were Honest

I decided to take the liberty of correcting these fliers and hope that people realize what the message should really be.  If we want honesty in our leaders, we better research who they really are and who’s backing them up. 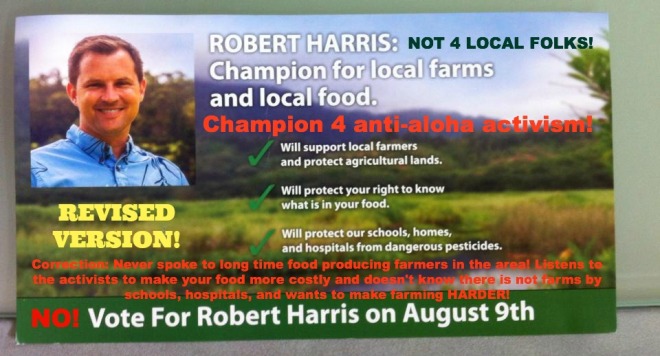 Let’s hold our politicians to a higher standard and seek for honest information on who they really are and what they support.  It’s clear that mainland money is talking here by all the misinformation posted on those fliers.  If we want a better Hawaii for the local folks, do you homework on your candidates and vote smart.  Who is looking out for the rubbah slippah folks?