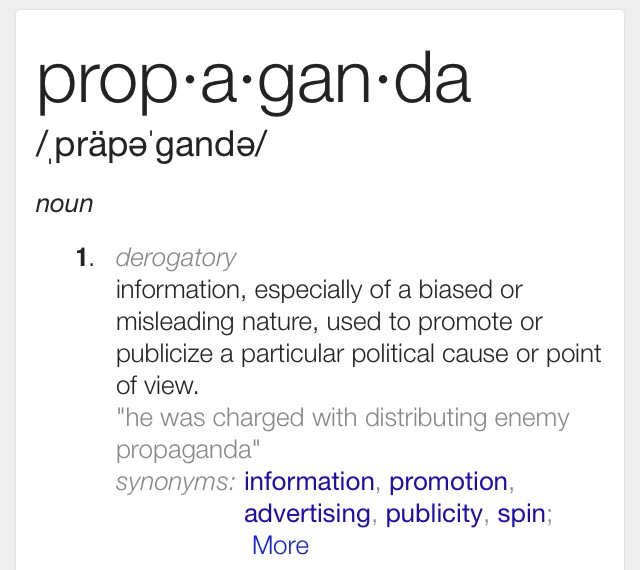 The latest disturbing trend that I’ve been observing with the activists, whether it be an anti-vaccination or anti-GMO one, is stating that science is propaganda. This clearly tells me that either they don’t understand the scientific process or some of the basics or don’t quite understand what propaganda really is. Honestly, it’s just them being plain old lazy to actually put some brain power to actually think about what’s being said. There, I said the painful truth about it.

Most activists seem to not even understand what propaganda really is. As one can see from the definition, it’s politically motivated. The fact that the activists are attempting to influence laws without evidence to support such regulations creates a slippery slope as to the necessity of the laws to begin with. These folks are very effective and getting others to repeat the mantras of people are being sprayed, kids are being sprayed, birth defects, and the aina is being poisoned. It doesn’t matter if all the multiple tests and studies done show otherwise. It’s a fear based statements that the least informed tends to latch on to easily.

When these emotionally hot statements are repeated over and over, it becomes fact to people, irregardless of what the data points too. Propaganda needs no fact to back up what’s being said and it’s effective when it’s fear based as we have seen. Whether the message is vaccinations will cause autism or GMOs means pesticides, it scares people and puts them on the emotional high horse crusade to protect themselves against this perceived evil.

If one should ask for evidence, it’s against the unspoken code that you do not question or doubt what’s being said. The evidence that is provided only repeats the same statements and few people if any know how to skeptically question the sources and just believe. A crusade against something so bad cannot tolerate dissenters or doubters for that matter. It will utterly destroy the energy and emotion that drives this battle and endangers the stature of leaders who benefit from the numbers of people engaged in their movement.

A perfect example of this is Kauai County Councilmember’s statements on pesticide usage there. He repeated over and over that there was 18 tons being used. As a result, people repeated it but never questioned it. The reality was much different but the repeated statements became truth despite the facts that it was half as much. Facts don’t matter and nor does being honest with their followers also. He could have easily corrected them but refused to do so because he’d likely create doubt in many people’s minds. Kauai County Councilmember, Gary Hooser, created so much fear that his followers turned very ugly on the social media and in the communities. That likely got the level headed voters to put him lowest on the totem polem this past election.

When activists claim that, “There’s propaganda on both side,” they’ve just shown that they aren’t able to critically assess what’s being stated. Instead of researching out the facts and critically vetting sources, it’s way easier to shut down logic and critical thinking all together. Why bother doing the hard work to actually open your mind and learn when it’s easier to dismiss science as propaganda? It’s easiest to live in fear and on emotions than it is to step back and actually think. It’s also more fun to have more people on your side too.

Creating doubt in your followers is dangerous in an ideological movement. Questioning of the information is a threat to its very existence and can topple the leaders that perpetuate it. It simply can’t be tolerated. The next best thing is to now tell followers to just dismiss evidence all as propaganda. Forget intellectual honesty and considering that you just might be wrong about what you thought. Don’t bother doing any real research and use the statement, “Science is propaganda.”

Yeah, you said it and you can continue repeating those same erroneous statements because you’ve acknowledged that you refuse to attempt to think critically or logically about the issue. That is a good reason why those who think like that should not be involved in policy making. No logic and no critical thought invested in the process means harmful unintended consequences that affect everyone. Haven’t we already learned that with all the bad bills passed across our islands?

2 thoughts on “Tales of a Lazy Anti-GMO Activist: “Science is Propaganda!””