One again, my dad’s farm was hit by thieves again.  A few years ago, he had his farm office broken into and had it vandalized at the same time by thieves looking for money.  They got away with the petty cash for the farm sale that time.  After that, his Punaluu farm had the fence cut and 500 pounds of papaya stolen as well as a tractor battery taken out of the engine.

It’s bad enough that he’s had to deal with the anti-GMO activists year after year, but just a few days ago a blower was stolen from a refurbished tractor. The thieves cut off the hoses from his sprayer tank and sawed off the bolts from the platform he custom built for it.  The blower was a Shindaiwa EB 600 model valued at $600.

It’s easy to sit back and think that simply replacing the stolen goods are not a huge deal.  It’s just more unnecessary costs and time lost due to thievery.  As I look deeper into into it, the problem is much more that we realize.

Much of the thievery can be attributed to drugs in many cases.  They want to fuel their habit and resort to stealing goods.  People doing drugs are usually a result of families with a long cycle of drug problems that stem from generation to generation.  These people have poor examples to follow and little to know education.  Without education, they have no opportunities.  No opportunities leads to substance abuse, crime, and even homelessness.

It’s even more sad that there is the millennial “leaders” of the native Hawaiians preaching to others the reject science by participating in anti-GMO or anti-TMT protests under the facade of saving their culture.  A culture of rejecting or impeding everything isn’t providing opportunities or truly educating people to get them out of the cycle of crime, drugs, and poverty. 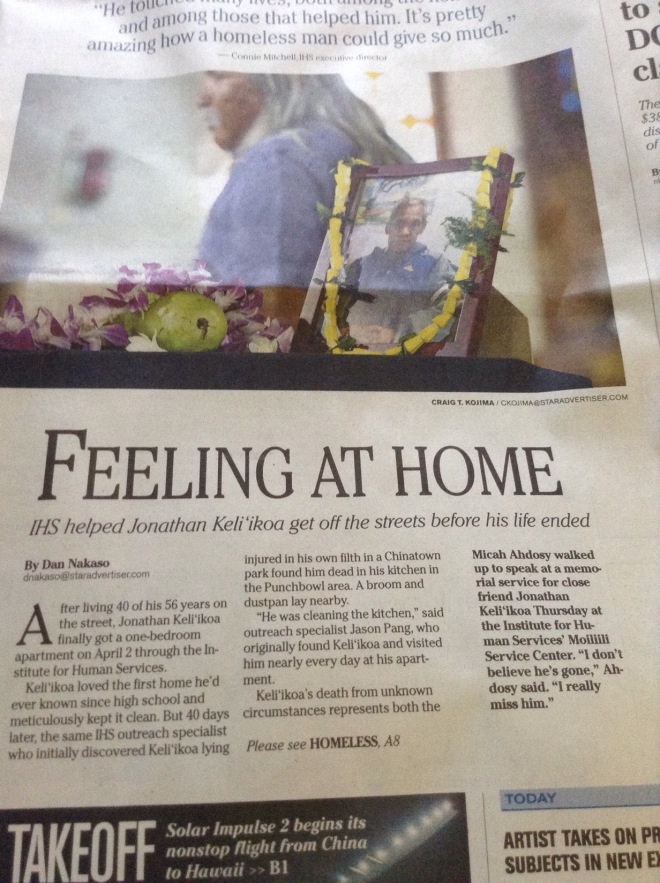 Just in today’s front page was a story about the tragic death of a native Hawaiian, Jonathan Keliikoa.  This man spent 40 of his 56 years of life homeless.  It’s a very distubing story that is all too common.  This kind of thing that should be enough to bring about a protest!  While the millennialis are busy organizing protests and marches, their fellow Hawaiian suffers in the streets.  If every single protester gave their time and support to agencies like the IHS to help others, wouldn’t that make a difference on real problems?

If we as a state focus on the simple words that Hawaiians treasure like malama, to care, and aloha, our efforts can be so much more worthwhile.  If each person valued a true education and opportunities, maybe we can break the cycle that keep people from rising up in society.  True leaders with real visions direct people in that direction.  Trendy bandwagon leaders only get people all emotional for the transient cause but never teach the how to sustain a vision, set goals, and make their own real mark in the world.

If people don’t rise up in society, they not only steal from farmers but from each and everyone of us.  We all pay for prisoners and those who are homeless or chronic drug abusers.  It takes away from resources that can be used for our keiki and kupuna.  We can never thrive if we don’t address the root of the problem.

Can a culture survive with leaders that direct people on the protest of the moment or do we need more visionaries that take the unpopular but right stance?  If people want to actually get somewhere, it’s time to scrutinize what you’re being told.  Is your leaders really educating you towards opportunities or using you to join the masses for their own fame?