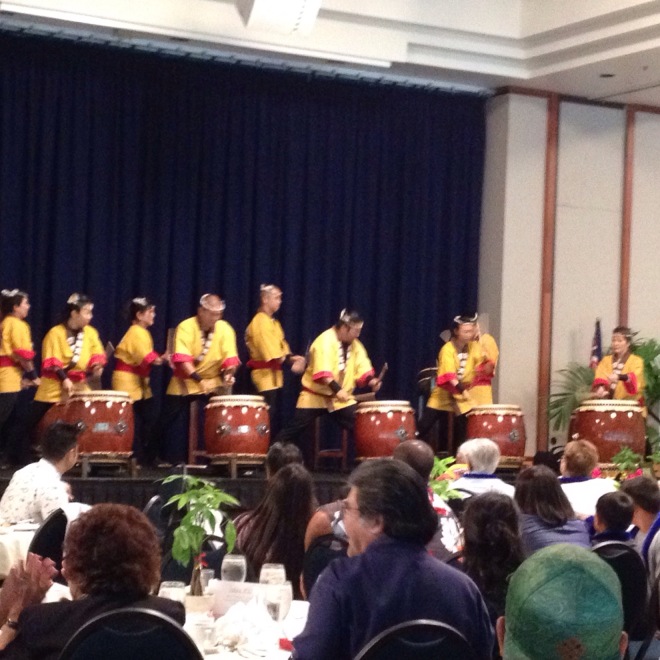 Longevity runs in our genes and a few weeks ago, our family celebrated the 100th birthday of a great uncle.  As part of his birthday celebration, we were treated to an Okinawan taiko performance.

It’s really thrilling and mesmerizing to hear the rhythmic pounding of the drums.  There’s a lot of choreography, planning, and practice involved in a single piece.  Each drummer has his or her own certain drum or instrument to play at a certain time.  Everyone has a role to play at a certain time.  When it’s all coordinated, the piece comes together to make a beautiful performance.

As I watched each piece being played, I couldn’t help but think about how this is a simple metaphor of music and farming.  Very few people have a special talent and dedication to play for the masses but yet everyone enjoys having music in their lives on a daily basis.  It’s an essential part of what brings us happiness.

Like music, every person has a role and responsibility to play at various phases in their lives.  We can choose what instrument we want to play as part of this ensemble.  Some don’t even know how to play music at all but will listen to it.  The ones who want to make music take on a lifetime dedication.  They have a strong inner drive to learn that instrument well individually to develop a skill.  A single musician can play a few songs, but people really enjoy a variety of pieces at various times of their lives.  A singer can only sing without instruments for sometime before audiences get tired of it.  Eventually, the individuals desire to come together with mutual respect and cooperation in learning how to make even a richer sound.  Lots of practicing is needed as an ensemble to develop perfection for a formal presentation for your audiences.

The styles and sounds of music are also ever changing, just like farming.  Nothing is static as there are many different ways of playing instruments and even singing.  In Hawaii, we have traditional sounds of chanting to falsetto or even modern styles including a mixture of all the above.  With the introduction of the Portuguese came the ukulele that changed the songs we hear to this day.   We treasure the old sounds as well as the new sounds.

The technologies around farming isn’t much different either where the musicians of the earth can select which instrument they want and use their expertise to compose their masterpieces with.  There’s no one single way the music can be made.

The farmers are all the performers in these respective bands.  Each has their own skill and role to play.  If each member doesn’t take the time to practice or develop the right skills or some only focus on pointing fingers at how bad certain members are, how can that piece ever become mesmerizing and beautiful? It just can’t if there is no desire to work together to create an array of melodies for their eager audiences.

The leaders of the ensemble really have the hard job of maintaining its members and keeping people engaged and wanting to be a part of the band.  The members themselves must also support each other to stay focused.  As members age, they must look to the youth to develop a skill and spark a fire within them to pursue being a part of the band.  The band is only as strong and as sustainable as there is a desire to be a part of it.  Without new members, the ensemble numbers will dwindle and end.

The performers are supported by the conductors, the farm bureaus and our leaders, who help to launch and sustain the careers of their members.  Not only does the leadership have its musical recruiters using the strengths of its members, but there are also conductors who also provide the backbone for the musical direction.  That is our mayor and senators who help to provide strong leadership to guide the band as well as the public in supporting the longevity of the music.  Without them setting the example for the public, the band’s music can never be heard or enjoyed.  If they don’t support the music, then neither will the audiences as they set the example to others.

A concert can never be heard by the masses without a venue to perform in.  That takes many people to set it up and organize it.  There are heavy machinery folks, agricultural suppliers, construction materials, auto shops for vehicle maintenance, accountants and health insurers, marketing people and the stores to sell their products.  Many hands are working together to share our music to the world.

If the audience would like to partake in these performances everyone is welcomed.  Majority of their supporters are the ones who enjoy what’s being provided to them and are a gracious audience.  They can’t sit at a performance and tell the musicians what to play and how to play their melodies because they realize that they aren’t skilled enough to do the same.  It would be a terribly disruptive concert for those who appreciate the musicians efforts because they don’t like to pieces that might be new and unfamiliar to them.  Some audience members may be inspired to start their own band and play their own music if they choose at their time and place.  It’s a music that can be played but not in the same hall at the same time.

We have the potential in Hawaii to become a beautiful ensemble if we nurture it.  We have people who are doing the hard work of developing that great masterpiece.  A band is only as good as its strength in collaborating and taking responsibility for oneself.  It takes many to put on a concert for the masses to enjoy by a very few skilled individuals.  If we don’t continually support those skilled folks, we stand to lose an important piece of what makes Hawaii beautiful and unique.

Hawaii has its own unique music and sounds that many of us have learned to enjoy and grew up with.  There are people who haven’t learned to appreciate that music and adamantly refuse to learn the melodies we love and cherish.  Some farmers are using new instruments and trying out new songs that are reaching the masses faster.  Some farmers prefer the old ways to make their concerts. Their audiences have choices in the concert they want to watch.

Right now in Hawaii and in our communities, there are audience members who have taken on a very misguided role in the making of music.  They’ve decided to go on the Internet and spread disparaging remarks and share false information against certain musicians to get more crowds for themselves.  They’ve taken to not making music but heckling those who are trying to play their songs.  Some politicians have even sided with these ungrateful people who partake in the music but still criticize those playing it.  These people don’t encourage others even try to learn how to play the songs of our farmers or even desire to listen to those cherished ways.  Don’t let that few hecklers and those politicians in the audience forever change the music of our islands.  Leaders don’t shut minds down to experiences or use fear as an instrument to lead from. They take charge of opening minds and inspiring others to think outside the box and create their own music to share with the world and share that passion to do the same.

I want to hear all the music in harmony.   I want to hear all kinds of music and support all those talented musicians of the land.  Will you join me in supporting the musicians of Hawaii, the farmers? Let the music play in harmony and collaborate to showcase that beauty of Hawaii farms.  I want my children and their children to know those melodies of the Hawaii I love.  If we don’t help support and nurture these ways, we stand to live in silence forever.