Normally, I work Monday through Friday from 8 to around 4:30.  It’s nice having a regular scheduled day that’s always pretty consistent.  However, this week was different because I knew that my family needed my help.  Instead of working my usual schedule, I worked on Sunday so I could take off on Tuesday to help them on the farm.  I’m lucky that I have a flexible schedule to be able to do that.

Well, my dad, brother, cousin, and their employee, Jacob, started around 7 am this morning to pick the fields.  Yesterday, my brother’s main help, Dean, collapsed from heat stress and had to be rushed to the emergency room.  He had to remain at the hospital overnight just to be sure that it wasn’t any cardiac issues.  On top of the loss of help, the roadway that led up to their farm had washed away due to a water main break that left a 20 feet long by 12 feet wide and 8 feet deep sinkhole in the main roadway.  They couldn’t pick that field yesterday.  Yet another complication was that the recent tropical storm, Darby, had drenched the fields leaving it super muddy on Monday and limited their ability to pick it quickly.  With one person down, the acres of fields still have to be harvested.

Tuesday was the day that the food safety inspector was also supposed to show up on top of a heavy load of work ahead.  They conduct regular audits to ensure that we are in compliance with the law to grow safe food.  The sinkhole kept the audit from happening because they couldn’t access our fields.  I had planned to be at the farm after attending the fishermen’s rally at the Capitol since children aren’t allowed to be there during the processing of the fruit.  It was just a crazy day for everyone.

I finally made it down to my folk’s farm just before noon.  My mom and nephew were busy processing the 5 bins of papayas picked from the Laie field.  My two daughters and I quickly jumped in to start grading papayas, washing, packing, stickering them, and stacking the 25 lb and 50 lb boxes.  My parents worked straight through to about 6 pm but I had to leave around 4:15 to pick up my baby from the sitter on time.  I decided that it would be best for me to pick up dinner for the crew since I was out and about, just to make it easy for them.  My folks and the kids stopped to eat just for about 15 minutes and then headed right back to work.

We worked straight from noon time to nearly 8:45 to process some 2700 lbs of papayas between the 5 of us.  My brother asked his partner, Frank, to come by after his day job to help pack papayas too.  From 6 to 8:45, 6 of us were working like crazy to get all of the papayas ready for delivery tomorrow.  We didn’t finish because it just became too dark to get everything done.

My hands are achy and I’m drenched in sweat but I feel happy that I could help out at the farm today.  It does mean working six days a week, but if they need the help and I have the ability to help, I’ll do it.  The processing and harvesting is only part of the farm.  Wednesdays are delivery days and getting the papayas shuttled to customers.  Lots of boxes have to be hand trucked around and lifted in and out of the truck.  My 74 year old dad is still at it spending all day driving around town and parking a huge truck in tight spaces to get those fruit out.  My brother does the same too.  Many times, they face angry customers who want their papaya at a certain time and aren’t very forgiving if there’s traffic or a delay despite knowing Honolulu having the worst traffic.

The other days are spent tending to the fields and scouting for pests and diseases if any.  There’s a lot of busy work and there’s never enough time to do it all many times.  There’s even the occasional off the grid hippie walking into our fields asking why the water spigot doesn’t work.  They love to mooch off of our water because they won’t pay for their own and don’t care to walk down to the beach where there’s public water at the bathrooms.  Combined with the other issue of thefts, the heat and bad weather makes the job even more complicated.

It’s interesting that I received this card stuck on my fence from a “progressive.”  I simply posted on comment on his Facebook campaign page hoping that he’d support all farmers since he was printing his t-shirts on GMO cotton.  Instead of replying back to me, he actually found my address and tried to talk to me, which is weird to me.  It’s like you kind of stalked me down.

Now why would I want to “call you to talk about farming” Patrick?  I don’t see anything in your resume or page that indicates to me that you know anything about farming.  You aren’t spending days in the hot sun and heat tending to fields that give your livelihood.  Nor are you in an occupation where you’re growing food for people to eat year after year, week after week, decade after decade.  I somehow doubt that you know anything about the bugs and disease we face as farmers and have no clue last to what GMOs really are.  Have you ever lost your hours of hard work because of a plant disease that was beyond your control? I doubt it.  But hey, you apparently want to talk farming.

I’ve seen that you replied to me later acknowledging that you “fully support Gary Hooser.”  Do you seriously think that the anti-GMO politician is even more knowledgeable about farming?  He talks the talk about organic farming with Dr. Valenzuela like it is such an easy thing to do.  He’s never grown food for several decades but hey, he knows farming.  I’ve never ever seen a photo of him breaking a sweat, covered in dirt, or scouting for pests, but hey, you progressives know farming so you say.  I really LOVE how you talk about GMOs and pesticides along with Ashley Lukens who has never farmed either and have no indication that you’re willing to learn about it.

So, progressives of Hawaii, the kind of progress you want is to increase our imports to 100% with the stances you take.  By being fully dependent upon imports, that’s a really GREAT thing for sustainability.  Those lofty dreams of yours of taking down the “multinational corporations” leave us small farmers with higher costs for agricultural supplies and other inputs, including affordable ag land.

The rejection of science in agriculture will leave us with extinct ohia trees and other crops, like bananas, which is at risk for total decimation by disease.  We can all get to enjoy Williams bananas that taste nothing like our home grown apple ones.  There won’t be anyone wanting pesticides near their homes too because you’ve decided to fear monger around it instead of educating.  Local residents get to experience invasive species right in their homes because you’re promoting refusal of treatment to kill these creatures. By blocking modern tools like GMO mosquitos, Hawaii folks may get to feel the pain and suffering of dengue and Zika too.

Lots of these same progressives are stating that we have to close of our exclusive economic zones in the oceans too in the name of conservation but then stand with signs criticizing the fishermen, despite telling folks that fishermen wouldn’t be affected.  One local food source with become a thing of the past with the loss of ocean access.

Progress to me is adopting new technologies and ways to do things.  Those who feed people are working so hard and yet progressives want to turn back the hands of time to make their jobs even harder by denying this technology.  I stand for making people’s lives better by using technology and innovation.  We, as modern day citizens, have benefitted so much from technology and yet there’s a faction of people who want to take it away.

So Patrick and other progressives, if you want to talk farming, I have a better idea over talking.  How about you come down to the farm and not take a tour.  No, a tour doesn’t give you any idea of what it takes to grow Hawaii.  You come down at 6 am and start preparing to harvest those papayas.  See if you can drive the tractors and forklifts without knocking over trees and safely keeping your workers on the platform.  See if you can load a 60 lb bin onto the platform and then remove a full one and place it in a high cube truck.  Stack 6 of those bins in that truck too without having them fall onto each other during the ride back to the shed.  Better yet, drive that high cube without scraping the side view mirror in narrow spaces.  Then once you’ve spent hours picking those papayas, please come down and wash and pack it all out.  Make sure you get all the orders right and know where they need to go and how many.  Hand grade every single fruit picked.  After you’ve picked it, pack it all up so that your fruit is ready to go.  Lift some 200 plus cases of 25 lbs and don’t forget to carry the off grade ones too in those 50 lb boxes.  After you’ve done that, the next day you can deliver them all over the island and sit in traffic too to get them to the stores.

You simply can’t “talk farming.”  That just doesn’t cut it.  Until you come down and do this for several months or even years, you don’t know farming.  And to the public who gets their farm information from Google, you don’t know diddly squat from what you read.

My body aches and I’m tired.  I’m reminded about how grateful I am to those that do farm. To those people who think they know farming but have never been on one, get on the farm or shut up before you criticize.  Yeah, I mean it.  I hope that the public who listens to “progressives” view of farming realizes that they listen to people who only talk with no real action showing their willing to learn about it, let alone work on it.  If you ain’t feeding people or on the field, you don’t know nothing about farming.

Live it before you talk about it.  So, when are you planning to work on our farm progressives? We have plenty of work available for you! 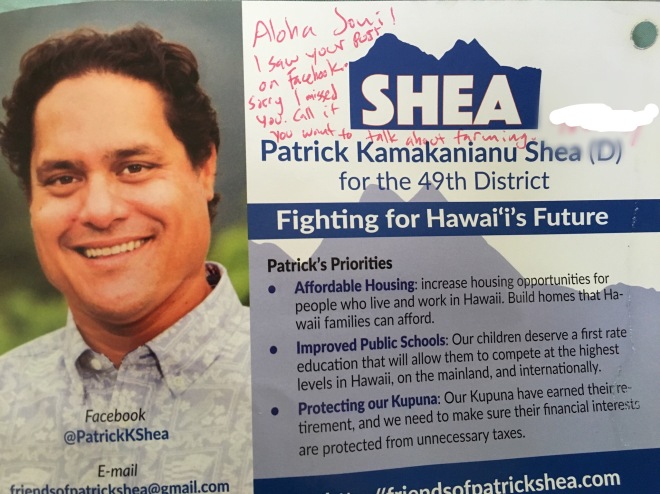