Over 40 years ago, a brand new chemistry of weedkillers came out and revolutionized farming. No longer did farmers have to till the ground to reduce the weed pressure in their fields. This product also was much safer than any of the chemicals used earlier. That weedkiller was glyphosate.

Back in the 60’s, farmers used many highly toxic crop protection products on farms to reduce bugs and weeds. As a result, many farmers landed up in emergency rooms with some even dying. When glyphosate came out, my dad was amazed that something so low in toxicity worked great on the farm. It was revolutionary to see weeds gone and better produce resulting.

Many long time farmers know the evolution of crop protection over the decades. What they started with worked well but was very dangerous. As more research developed over the years, improved products became available as old stuff got phased out.

Fast forward to 2019 and expensive ads are being played on the radio and newspaper phishing for victims of glyphosate. Many of the court cases are not even farmers who have had long exposures over decades to it which is of no surprise. The activists could not get the results they wanted in a scientific study and instead went to the courtroom to make their case.

Although the many regulatory agencies around the world have found that Roundup is not a carcinogen, the juries are finding otherwise. These cases are being awarded multimillion to billion dollar verdicts, farmers are still working their fields like they’ve done for decades. The media has been quick to craft scary stories about what happens in the fields.

Thanks to lots of undisclosed funding through non-profit “advocacy” lobbying groups, Dewayne Johnson is touring Hawaii about the dangers of glyphosate. I swear I read that the case had to be expedited because of his deteriorating health months ago but now he is able to tour Hawaii. He has even rallied our State Department of Education Superintendent Christina Kishimoto to ban the use of herbicides on campus and seek organic alternatives!

The fear of cancer and the need to “protect the keiki” likely shut down the Superintendent’s critical thinking skills because it does not appear that the Department of Agriculture was consulted. As a parent of public school kids, I am angered by this lack of logic and critical thinking by the leadership of the DOE.

My kids get served hot dogs, spam, and other processed meats which are known carcinogens, yet she thinks banning weedkiller is a good thing? Does she realize that weed growth harbors rats, ants, snails, slugs, and mosquitoes? We could be increasing keiki’s exposure to rat lungworm disease and even dengue fever! Let’s not forget that little fire ants were found in my community also. I guess school gardens will become infested by pests too and modern agricultural practices will go out the window.

I wonder if Dr. Kishimoto recalls how the current lieutenant governor Josh Green demanded that public schools be sprayed for mosquitoes after an outbreak of dengue fever occurred on the Big Island. I bet fearful parents were not happy and would rather take the consequence of getting dengue fever instead. It begs the question where I have to ask, how much should we listen to the angry, fearful mob? Is that doing us any good?

Dr. Kishimoto’s reaction to reject the science and ignore agriculture is just another mark on the board of the same people pushing only organic agriculture and a complete rejection of science and critical thinking. Those same parents demanding no pesticides probably don’t vaccinate for the fear of “toxins” rule their lives. I even chuckle because the ban is limited to staff and not to all the homeowners who live right beside the school. Even a volunteer parent could apply weedkiller on campus too given the way she has written her “ban.”

We will all pay for the bad decisions made by the leadership in Hawaii. The fact that the Hawaii Department of Education and even the Board of Education is moving us in this direction means another nail in the coffin for agriculture. 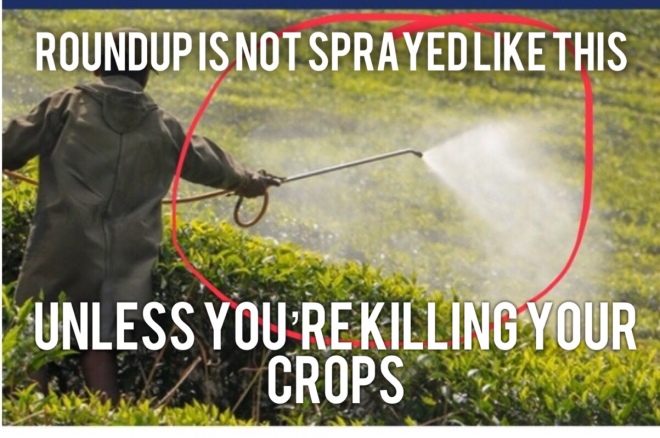