Yes, this is a month to take action to stop hunger. Actually, we should remember this every single month because there are a lot of people who go hungry in our communities.  It goes well beyond a single month and must be something we continue all year round. I try to do this every month myself since I have a co-worker who is a regular volunteer at the Hawaii Food Bank.  Whenever there’s a good sale on some canned or dried goods, I buy a bunch at Costco or Longs and share the extra stuff with whom ever may need it.  If I just hang on to it, it will likely go bad so sharing it with others is a worth cause to me.  It’s something small that I can do hopefully to help others.

I also want to be that example to my children to look beyond their own noses and help others if they can.  I remind them how lucky they are to have food every single night and never have to go hungry.  A good sense of appreciation needs to be instilled in kids nowadays who have everything but still complain of not having what they want.  We forget that once our needs are met, it’s easy to overlook it and take it for granted.

I have to say that I was really disappointed a few weeks ago when I read that a well-know chef, Ed Kenney, has decided to align with the Hawaii Center for Food Safety and help them fundraise for their Chef Action Network.  I think it’s great that he supports local and sustainable food and don’t we all support that?! However, the Center for Food Safety is not about making food affordable but rather making people fearful of food and looking at ways of actually making it more expensive.  You’d think that with a name like that, they are about making food safe but really, they are about pushing organic food and labeling under the assumption that biotech foods is not safe.  It’s elitist kind of thinking that is being pushed here once again.

One thing interesting to note is that speaking of food safety, it is a law that any food handling must be done with gloves to prevent the spread of potential contamination.  If the Center for Food Safety were truly about safe practices, they would have told Chef Kenney about this potential violation of his handling of food. 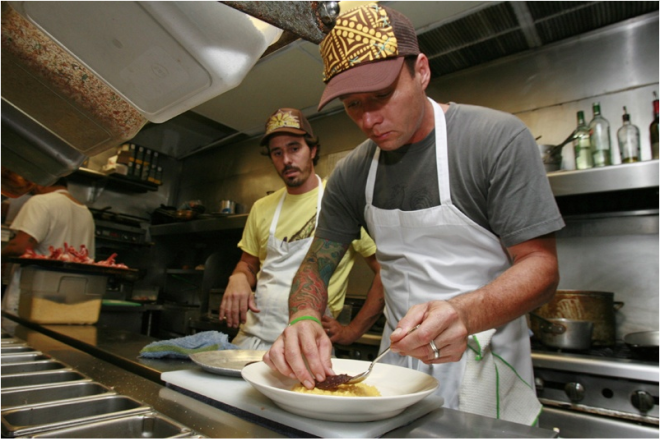 If the Center for Food Safety were successful, they would have gotten GM foods labeled.  That GMO label will not only increase prices on food but also require a complete overhaul of our food processing all together that will definitely cause increased costs across the board.  Not only will the consumer have to pay more for food but so will the chefs who own businesses in our communities.  Will these small business owners be able to handle such extra costs?  I highly doubt it.  It is no wonder why restaurants are some of the most difficult businesses to run with the costs of supplies and labor constantly going up.  When a business closes shop, it means less employment opportunities also.

These activists group aren’t about helping Hawaii folks as they claim either.  They succeeded in getting the flawed Bill 2491 passed only to have it overturned in court as expected.  This in turn has taken some $210K to defend the bad law which doesn’t include any of the other costs of other staff and resources used in all of the proceedings.  No sooner than it was deemed invalid, did they immediately start to look for cash for more flawed bills.  Couldn’t all that money have been used to helped the needy in the community instead on bad advice of activists? Why are they fundraising for themselves and not others who could really use some help right now?  You will never see a Center for Food Safety feed the hungry food drive or affordable food coalition from these people because that is not what they are about.

I can’t help but be very disappointed that well known chefs like Kenney have not looked into this group further before deciding to support them.  When local people are depending more and more upon food banks and food supplement programs and a greater percentage is living in poverty, he wants to support a mainland based group who’s main goal is increasing food costs using fear and misinformation.  This group is also about demonizing our local papaya growers who have survived the papaya ring spot disease and are still farming as a result.

How does supporting the Center for Food Safety help our rubbah slippah folks?  Basically, it’s not about the locals but about a new bunch of mainland folks telling locals how to farm and what’s good for them.  You can bet they don’t have a pair of these at their door steps!

**Update! In today’s Star Advertiser, Kenney is featured there again and he’s wearing gloves while preparing food.  Good.  And once again, Ashley Lukens of the Center for Food Safety is touting their disingenuous message again to the public.  No surprise! Note that they aren’t about helping the hungry!