Here’s another thing that I hear frequently being stated by many of the anti-GMO activists, “Stop messing with the DNA in our food!”  Mark Fergusson, the CEO of the very much anti-GMO Down to Earth Markets also called it, “God Move Over.”  I just hate the fear mongering that’s being said about a technology that can do so much for growing food and decreasing our impact to do so.

The goal of the anti-GMO supporters really is to take advantage of the fact that most people have little to no clue as to what GMO really is.  When there is a huge number of people who are not literate in biology, chemistry, and basic genetics, you have a nice market of people to target with fear and doubt about this technology.

The activists from the Food Babe, Babes Against Biotech, Hawaii GMO Justice Coalition, Earthjustice, and the Center for Food Safety, will also go on to state that genetic modification of our food stuffs is going to mess up people in some form or fashion.  They love to use emotion evoking phrases like, “it’s being shoved down your throats,” to “it’s killing our keiki and kupuna,”  We also can’t forget those syringes stuck in food and skull in crossbones bit that they want on this GMO label.

Why are these people so afraid of this thing called DNA?  It’s probably because they don’t understand what it is to begin with.

I know that videos are great ways to teach people a thing or two about what DNA really is.

Then when you get a better understanding DNA, let’s talk more about genetics.

I hope you kind of got a general idea of DNA and basic genetics.  Now here’s a great video on the story of biotech papayas and how it all comes together.

Note that even with this modification of the genetics, the composition of the papaya is not significantly different than the conventional type.  Also note that the transgenic papayas have disease resistance built into it.  It is developed to resist the papaya ringspot virus that is spread by an aphid.  Even though Gary Hooser has told so many people that GMO means pesticides, it does not at all.  It is a technology that can be applied in many different ways.

If you’re still feeling afraid of genetic modification in our food, let’s talk about the food we eat today.  Here’s a great example of two different types of tomatoes that have altered genetics done through selective breeding. 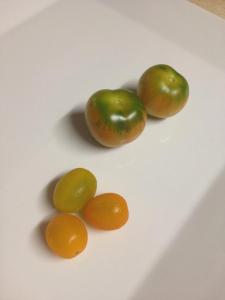 These clearly have different genetics to result in these two forms of tomatoes.  We can eat both of them and do you think our body can tell the difference?  No.  The compositions might be slightly different, and the DNA is different but our body can’t tell.

Of course, the next line that a typical anti-GMO activist might say is that these tomatoes don’t have fish genes in it.

That’s a funny thought because if you were to eat fish, you are eating fish genes and have you turned into something awful?  Ummm…  No.  So even if a tomato might have genes of a fish, a common blunder quoted by many antis that is not true at all, would your body know this?  Nope.  Genes are not species specific!

If you watched the videos above, you might figure out that you can’t say that the genes is what’s making you allergic to something either.  If you think that there’s a new allergen that’s created by the genetic modification, you’d be wrong too because it is tested and tested for these potential issues.  Allergenic proteins are pretty well known and if detected, the trials are abandoned and destroyed.

The same anti-GMO activists decry biotech testing but then listen to Dr. Oz touting those exotic miracle cures.  He went from touting goji berries and now garcinia cambogia, which has no allergenic tests done ever but assumed safe.  Wouldn’t that worry you more to be consuming these untested things?  Nope.  Where’s the precautionary principle applied here?

The DNA fearing God Move Over crowd continues to cry about the evil of genetic modification and the need for the precautionary principle, but always misses a key point about this technology.  They are worried about what happens when they consume this GMO derived food product because of the unknown genetics.  If that is the case, why aren’t they worried about what happens when they consume banana genes or GMO free noni genes?  If one is afraid of messed up genes, then they should really fear things like heirloom tomatoes that have really altered genetics.

There’s a lot of DNA in many GMO free products that they should be worried about but don’t even realize it.  I’m more afraid of the bacterial genetics of what’s on some organic foods than I am of GMO corn or papaya any day.