In today’s Civil Beat, a former “anti-GMO crackpot” as he calls himself, Bronson Kaahui, published a great article about the biotech issue in Hawaii. He calls it out for what it is and it’s hitting a nerve with the antis again.

I just happened to open up my Instagram account home page and came upon an angry looking Manaai Anthony calling out Bronson about the article.

In the comments he writes this so called “challenge,” which almost sounds like a threat.

This kind of stuff is nothing new to this guy at all.  When the Civil Beat articles were hot on the biotech issue, he’d tell people to do illogical things like this.

I have to wonder how this really is going to create any productive discussion about biotech.

Using this kind of logic, any anti should also consider doing this to match the challenge they offer.

The anti-GMO activists like Manaai Anthony make claims about the dangers of GMOs but then post their pizzas with GMO cheese! (90% of cheeses are made with GMOs.) You know that if you argue with these people on GMOs, the argument will then shift to the “evil corporations.” He then sells his product to a corporation by the name of Whole Foods Kahala, and not to Whole Foods Kalihi.

I have to shake my head at this kind of stuff.  The sad thing is he preaches this stuff to thousands of followers.

It’s the same with the Thirty Meter Telescope protesters.  A commenter placed this photo in response to Richard Ha’s blog post on my page.

I sat there and read this, then remembered the protests at UH.

This is what was on the news a few weeks ago.  I clearly see the disturbing of rocks and terrain happening and I know those posters and signs are likely landing up in the trash cans.

I responded to the commenter with these photos and he made this statement. 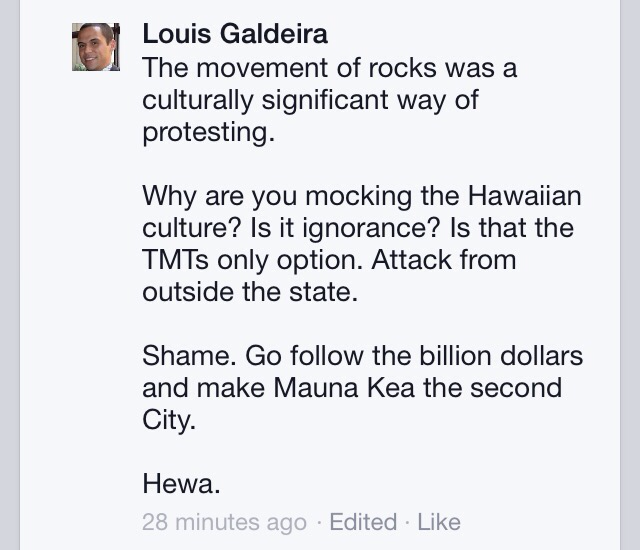 Something just doesn’t make sense here. If you’re going to say something, you’d better walk the talk.  You can’t be making accusations against others and then get upset when you’re called out on it.  If you truly want to be credible, then pay attention to the world around you and quit calling everything that challenges your faulty views as propaganda.

Louis accused me of mocking the culture which isn’t what my point is.  People get swept up into the emotional highs of these “movements,” then don’t even bother to think logically about the world around them.  The Hawaiian culture is one that can aspire to the highest height if more of them stop following bad leadership and catchy slogans being pushed on them by people like the Babes Against Biotech and the Center for Food Safety.  These people lead with no aloha and their followers reflect it. They yell to others to wake up.  Yes, wake up and think before you blast yourself on the internet. 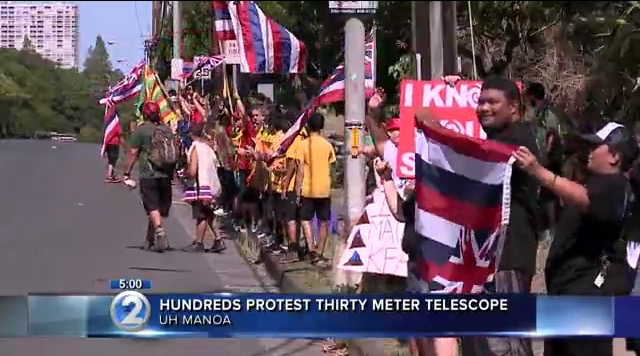 Don’t cry out against corporations and wave your nylon flags. Dupont created that material back in 1935.