There is a breaking news story that a possible case of Ebola is at a Honolulu hospital tonight.  It’s not confirmed however, but this shows how it is indeed a real problem worldwide should it spread. Hawaii is an international hub that so many people travel through making it a prime location for the spread of contagious illnesses.  Recall other illnesses that have made it to our shores several years back from H1N1, swine flu, and Dengue fever.  Diseases spread and it can be devastating.

According to the CDC website, genetic testing is used to diagnose this deadly disease.  Yes, the science used in genetic engineering is applied in making that diagnosis of the Ebola virus.  (Any protests to GM technology in medicine?)

It is also interesting to note that several aid workers who had been infected with it in Africa managed to recover from this viral illness possibly due to GMO tobacco plants that produced an experimental drug.  You can read more about this treatment and outcomes here and watch the video below to hear his story.

So while the people of Hawaii are growing concerned about this contagious and very deadly illness, in Maui County, voters are seeking out a ban of GM technology until it is proven safe.  Hawaii has the perfect growing conditions to possibly be a contributor to solving this very deadly issue and yet the public will get to vote to block it from happening.  Our state could be at the forefront of helping to research and grow medications that can alleviate suffering and death but we’d rather use well read Google scholars to dictate laws that prevent us from being global citizens in helping others.  That’s just sad.

We are fearing a technology that can save lives but prefer to listen to lawyers from Earthjustice, the Center for Food Safety, and politicians like Gary Hooser, Tim Bynum, Elle Cochran, and activists like Nomi Carmona and Walter Ritte to dictate laws.  I can’t help but wonder if political science PhD. Ashley Lukens of the Center for Food Safety is rethinking her stance on blocking this technology when faced with Ebola.  Where’s Vandana Shiva and her life saving offer to the people suffering from this deadly disease?  Where’s the organic activists like Zen Honeycutt of Moms Across America and her claims that organic cures autism helping to alleviate the suffering of others?  Where’s Hawaii SEED and their donations to solve this problem? What’s the SHAKA Movement doing to revamp their ordinance should this disease and others spread across the world?  Will we leave ourselves handicapped to do anything to address this problem because we choose the “naturalistic” lifestyle and live in harmony with nature? Ebola is indeed natural and definitely something none of us want.

This is a real issue that we need to address and if we don’t, we won’t be ready for it should it escalate further and we’ve shot ourselves in the foot.  Think its not real? Think this is fear mongering? Listen to Dr. Kent Brantly, one of the survivors of the virus, tell his story of what is happening in West Africa.

I know some people are reading Natural News and alternative health sites that are telling you that Ebola is a made up illness and such.  Please have some skepticism and get off of those sites as they are making you look foolish for not even questioning it.  Questioning genetics and the science behind it only to call it propaganda isn’t considered skepticism.  That’s called being scientifically illiterate and not something you should be professing in the social media.  Those conspiracy theories aren’t helping your intelligence and critical thinking or logic either.  You can post them on the social media and believe them, but quite a few people know you’ve been made the fool but are too nice to not say it.

To pass bad laws like the Maui Moratorium one is irresponsible at best because the touters of it have no idea of the unintended consequences of such an action.  Do we want to block our options for very viable solutions because of what someone read on the internet and believes with no facts behind it?  I say no and you should too!

I happened to get a sponsored ad on my Facebook newsfeed today from this newly formed page, “Vote Yes, on the Maui GMO Moratorium.” After reading a post from fellow blogger, Iowa Meets Maui, on the irony of this group’s messaging who says such a law is temporary and then prints out messages of eviction, I had to put a comment on that page.  Here’s a copy of the conversation that follows. 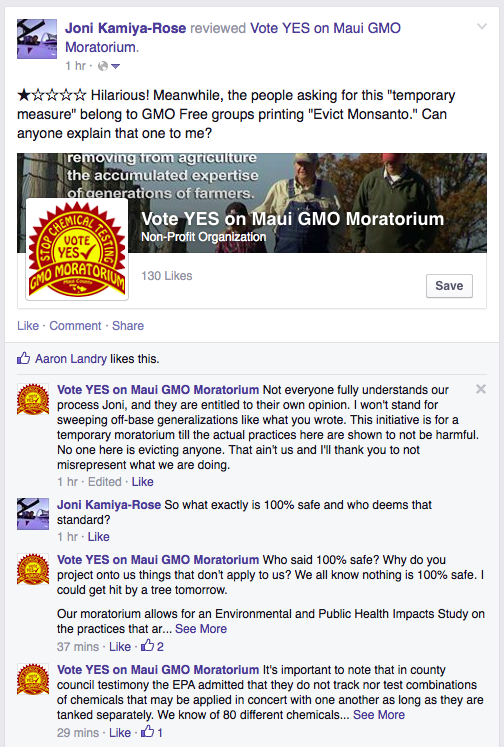 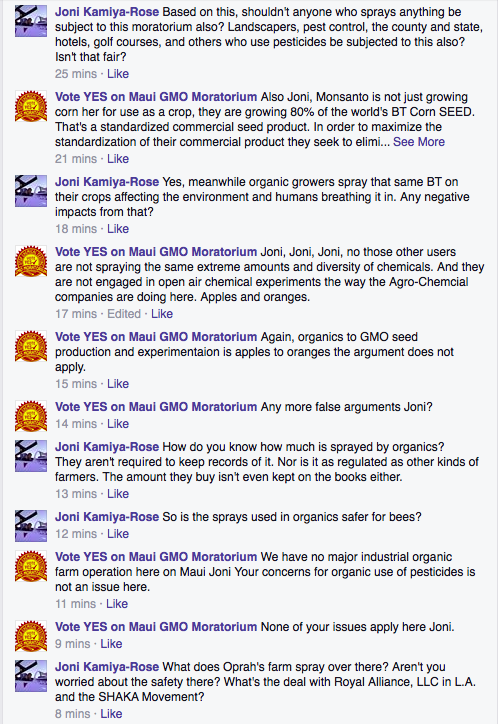 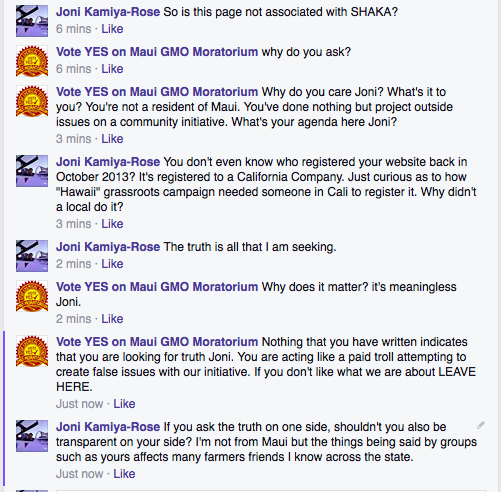 These groups are demanding transparency but can’t even practice what they preach themselves.  Apparently to the SHAKA Movement, they can be very honest at times when they state that the truth is “meaningless.”

So will you vote for a group that seeks for transparency and can’t do as they ask and find the truth to be meaningless?  I sure hope not.