A few months ago, I did a post about the supposedly grassroots Maui SHAKA movement.  By doing a bit of research on them, I found that it appeared to be a California based movement that was funded by a real estate venture of some sort.  That’s the most I found on it.  You can read the original post here.  A lawyer by the name of Tom Rivkin, left a comment accusing me slander and not telling the truth, so I asked him for the truth that he never responded to.

Today more news came out on this SHAKA movement that they were paying $5 for people to sign the petition.  They announced it publicly on their pages a few days ago.  They have gotten much more aggressive with their ways too by accosting people in public areas only to be kicked out later. 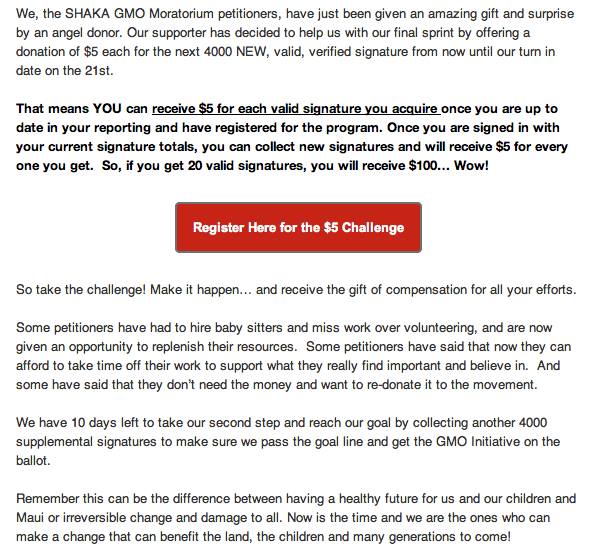 Not only was someone willing to pay up to $20K for signatures, they were also attempting to register voters at the same time and posted the voter registration of Maui voters online.  It included people’s names and addresses.  I guess it was a way to legally harass people to sign their petition, but it was removed today due to complaints about it and it was illegal.

What’s even more interesting today was the article in Civil Beat detailing how the anti-GMO groups have been under scrutiny by the Hawaii Ethics Commission.  Turns out biotech’s worst hormonal attacker has been violating the lobbying law and she had to disclose all of her funding and expenditures.  It’s all public information through their website along with their contributors’ names and addresses.

Someone’s name on that list caught my eye as I was browsing it.  The main reason it caught my attention was the fact that the amount given to Naomi Carmona was quite significant at $5K.

I also recalled seeing her name as the registrant on BREG for the SHAKA Movement filing. 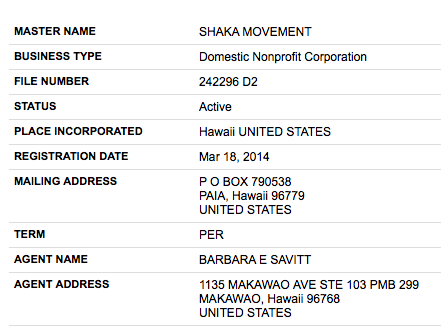 Note how there are 3 different addresses listed for this on person.  So I decided to do some digging on this Barbara E. Savitt woman who has a lot of money to give.  I looked her up on Spokeo and there is not a single Hawaii address listed for her at all.  They are all California addresses.  When you look up the first address, you find that she owns a $1.15 million dollar home purchased back in April 2013.

It also appears that she was president of a company in California called the Savitt Family Foundation.  It was a non-profit corporation and is no longer in operation as of 2006.  It is listed in GuideStar as a non-profit but has no filings detailing their financials.  This sounds a whole lot like Hawaii SEED and their guise as a non-profit but attempting to lobbying under it.  It’s a great way to influence laws by avoiding taxes if you pose as a non-profit.  You get to avoid the lobbying laws and filing requirements while all of your contributors get tax write offs!  What a clever scheme they have concocted indeed!

What is even more intriguing is that Civil Beat also posted yet another article on the SHAKA movement paying people for signatures tonight too.  They list that an anonymous woman is paying for the signatures.  I think I’ve just discovered who it is and she’s once again hiding under that nice non-profit status hiding as a lobbyist!