There are a certain bunch of anti-GMO club members that have taken to bombarding the social media.  If there is anything with those 3 letters on them, you can bet you’ll find them there.  There was a post yesterday in Pacific Business News having an editorial board meeting about the issues at hand in our state regarding biotechnology.  Of course, when you put a comment after all the anti-GMO activists, you will get these kind of comments.  Note that I simply asked a question in response to the post.

What I got was not a surprise considering that these activists have taken to bombarding the social media.

This person has even accused me of antagonizing her too!  I can’t quite figure out how but once again paranoia sets in.

Another thread starts up too on this same link. 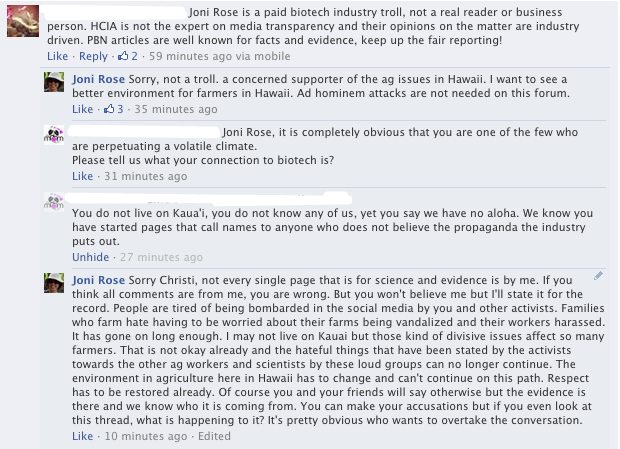 I do remember how she and yet another so called farmer posted some very “nice” comments on a farm fair picture on another ag FB page.

Here’s the no aloha comments posted by these same people in response to mine. 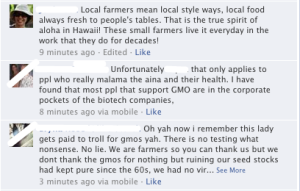 Unreal what these people are capable of saying publicly.  Of course I was forwarded this clip too of how I acquired my nickname.

There is no getting through to these activists.  When they have to start attacking people personally, it really shows that there is nothing in the form of evidence to support their argument.  They can only resort to name calling or accusations of being a shill.  This clearly demonstrates that these people are unreasonable and will only be agreeable to one single demand, their way.  Working with the unreasonable will get you no where.

From the Bad Skeptic link:

“The only thing the crier o’ shill proves is that they don’t give a flying f*@k about having an actual discussion, about hearing any viewpoint but their own, or about any reality outside of the one they’re already convinced exists. Saying, “I’m right, and that’s that! Neener!” is good enough for them.”

That’s fine with me but more reason why we can’t make laws and policy according to these activists demands.

One thought on “The Ad Hominen Attacks of Tokyo Rose”