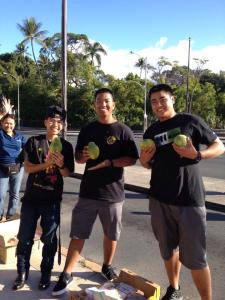 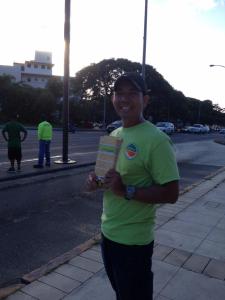 For the past two years now, it seems that the barrage of anti-GMO sentiment would never end.  In 2012, the farmers were hit with the GMO labeling bills and the Babes Against Biotech.  Then again last year, the same sentiment continued yet again.  Two whole years of fighting and speaking out for your family farm and biotechnology can get exhausting.  There is always something to fight against and after awhile, it gets really tiring having to defend yourself.

I was just lamenting to a fellow farming agvocate the other day about getting weary from all of this.  I thought I’d take a break from blogging to give my mind some rest.  I felt as if I had run out of ideas and thoughts already.  Taking a hiatus was what I thought I’d do last night that is.

Early this morning, before the sun was even up, my brother Mike and I went down to the State Capitol for the Eat a Papaya Day.  We packed up freshly ripened fruit and other supplies to help advocate for the papaya farmers across our island.

We had our signs made that showed the drivers what our event was about and had lots of samples to hand out to pedestrians and drivers.  We had papaya farmers from the Big Island join us as well as other biotech farmers alongside. 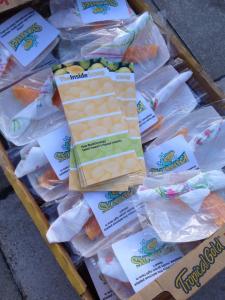 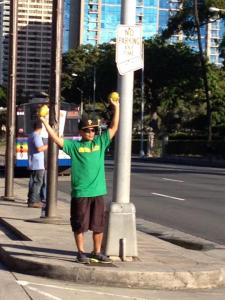 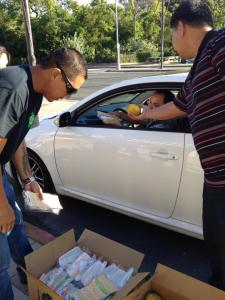 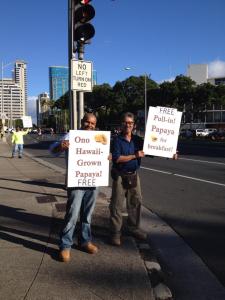 We handed out some 400 samples this morning along with whole papayas that were donated by the farmers.  We were really well received by the majority of people who were really thankful and excited to “Try a Papaya.”  How many times can get some a free papaya handed to you?!

There was a single homeless, half naked man who initially took two papayas but returned them after being told that it was GMO.  (Amazing that a homeless person can be so choosy!)

Shortly after our campaigning with the public on Beretania Street ended, we were treated to even more help.  More biotech farmers joined along with the papaya farmers and we walked the floors of the Capitol and visited legislators.  Seeing all of the people around us that shared the bond of biotechnology and talking to many of them, it reinvigorated me even more to continue to speak out.  It was just what I needed today to continue to speak out for this technology that helped save our farm and others. 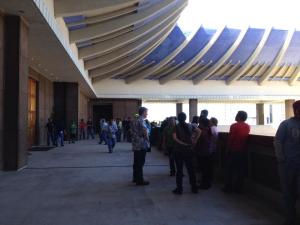 So many people, including legislators, got to hear the story about how biotechnology saved our farm.  I also met many people that I only know online today that have read my thoughts here.  It’s amazing to know that people are hearing the farmers out like ours.

I’ve really come to realize that so many people are also linked to the papayas through our common bond of biotechnology.   The common bond is that we are all people and that we are using a technology to help people from farmers to the consumers who appreciate our products.