Several years ago, I decided to get into gardening.  Yes, gardening, not farming.  It started out as a hobby for me to grow my veggies here and there and a good thing to do with my kids.  My first project was trying out aquaponics, which seemed like a neat thing to start.

I asked my dad what he thought and he said, “Sure, go try it out.”  I figured it sounded cool to try and he said it would be good to do.  So I went ahead and decided to take a leap at this great project.

I spent about $300 for a small system with a 50 gallon tank, cinders, pump, PVC pipes and the fish.  It did great with my lettuce initially but I found that the growth rate was pretty slow for me.  I couldn’t get the nerve to kill those tilapias and eat them either because they stunk so much.  Those fish essentially became pets.  In frustration, I asked my dad, why does it grow so slow?  He told me that there wasn’t good control of nitrogen being delivered to the plants in these kinds of systems.  Aha!

Being impatient and eager to grow something, I decided to start up regular dirt boxes that were raised to grow my garden.  I designed a stand and sawed up the lumber and put it together.  I filled it with regular potting soil from my favorite place, Yamashiro Hardware.  I also built it at standing level so that my grandmother could garden in it if she wanted to.

I had my two kids fill up the boxes with the potting soil and a mix of compost as I heard that there was this mix that was really good for gardening.  Well, the things just didn’t grow so well and I was stumped.  I had my dad, the plant doctor, take a look at what what going on.  He told me that it was most likely the compost product was not completely broken down.  The bacteria had not broken down the organic matter and was now stealing the nutrients that the plant needed.  I had to wait for a few months before I could start again.

After about a few months later, I restarted my boxes up again with a nice fresh seeds.  Within two months, I really could see the difference in the health of the plants compared to the first generation.  I asked my dad again what should I do next and he said put some fertilizer periodically.  Sure enough my garden was beautiful!

I was pretty darn proud of myself for getting my garden going.  Then nature took its course and the delicious, mild mesclun got some sunburn.  Despite watering it daily, one hot day, it dried out the soil just a a wee bit too much.  All of my delicious lettuces turned awfully bitter and it was ruined.  I asked my dad again what happened and he explained to me why it’s important to water lettuce or lose your whole crop.  Lesson learned again.  It isn’t that easy to grow things.

So much for the lettuce.  My next experiment was beets, as it was something that my mom loved growing on the side of my dad’s fields when I was a kid.  I had just seen something neat in a Yamashiro’s ad for an organic fertilizer that I wanted to try out.  The one pound bag of bat guano was pretty expensive at $11 which was more than the box of MiracleGro.  I did two boxes of beets and learned why the regular fertilizers worked better for the money.  My dad came by and asked me what I had put on the box of beets that were half the size of the thriving box.  I told him that I used bat guano and he just chuckled at me again.  “Did you learn something there?” he asked me.  I had to agree, yes, I did learn something again. 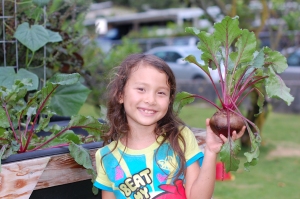 I was really starting to get the hang of this gardening thing after about a year of trial and error.  My next experiment was growing cucumbers, which was something my grandparents did on their farm.  I did the composting bit and waited a few months before I dropped in a seed from Fukuda seeds as my dad said buy the local seeds that are best suited for here.  I listened to him and did so.  The vine did beautifully as I had expected after learning from how many mistakes.  We got about 8 beautiful 2 foot long 3 inch diameter Japanese cucumbers. 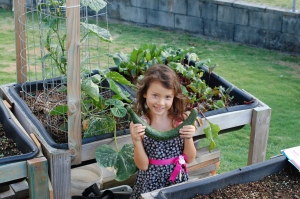 I was pretty proud of the first beautiful cucumber we got and kept seeing the flowers bloom, hoping for more.  That did not happen as expected because I did not pay attention to what nature was doing to my vine.  My dad did his weekly walk by my vine and said, “Hey, are you spraying your vine?”  I said, “Spray for what?”  He continued, “You got lots of bugs on there and you’d better take care of it soon, but it might be too late already.”  He went on to explain that aphids multiply exponentially and based upon what he saw, the population of aphids on my vines had already done that.  I listened to his concoction of what to spray which was some dish soap and water.  Sure enough, like a prophet, my vine was overrun by the bugs and I only got a single cucumber.  My cucumber was literally a mono crop, a single vine, yet it was decimated by bugs.

I can’t tell you how many lessons I learned from these few years of gardening and the expertise that is needed to understand what happens.  I started to have a greater appreciation for those farmers who are able to keep a stable supply of their produce filling our shelves week after week, year after year.  It takes a lot of education, observation, know how to grow food for others.  Just thinking about all the hard work my dad for all these years really made me have a greater respect for him and his knowledge base.  My dad is an amazing person that is unbelievably dedicated to his life’s work and passion, which is growing food for people.

For me being his daughter and seeing what is happening in our state with farmers has really affected me.  When people started joining the bandwagon of the “right to know” movement to label my dad’s fruit, it got me mad.  On one hand, they’d say then have this fundamental right, and then on the other side of the coin I see them making blatant lies and wearing gas masks carrying papaya trees.  I also hear people saying how his trees are poisonous and that he is destroying the a’ina because he isn’t organic and grows GMO.  How can that be if he can grow his crops for 40 years now?  It’s utterly saddening when lawmakers also jumped on this trendy activism also and attempted to pass such a law against farmers like my dad.

I saw how much time and effort was spent by my brother and my dad to go down to the legislature to defend their life’s work.  He couldn’t get to that broken plow, nor could he fix his truck, the fields had to wait to be planted, scheduling in testimony time between deliveries, and so many more tasks had to be put off.  Then the anti-GMO county laws started yet another onslaught of legislation that had repercussions that would trickle down and affect his farm once again.  More work had to be put on the side to deal with more regulation that was being incited by these two faced people.

The 99% was making demands because they never took the time to actually come and learn from a farmer themselves about how food was grown.  They had gone to some community seed exchange event and learned some misinformation being perpetuated about the seed issue by groups like Hawaii SEED and others.  Yes, they could grow things without pesticides and that empowered them with this false knowledge that if they can do it, so can the average farmer.   That garden they were growing was testimony that they can grow without “bad” chemicals so everyone else should do it too. Even images across the social media touting organic farming is better for you and so on bombarded people’s minds of farming.  They became “experts” since they read a meme that organic is a economically viable and sustainable way to farm.  So many false images and information gave people this idea that if a farmer wasn’t organic or GMO, they were bad people for choosing such a way.

Most non-activist local people and some level headed legislators saw through all of this and worked through to fight for the farmers rights, only to be impeded by ones who have never ever fulfilled a farmer role ever.  The ones who choose to align with the gardeners and their “rights” don’t have the full picture but are the ones making laws, which is misguided.  They contribute to the problem of why we can’t produce enough food by creating this fight.  If we as  a state really want to have more local food, it’s not just the farmer’s job to speak up and educate people, the local people wanting their food also needs to speak up for them.

It’s hypocritical of the “gardeners turned farmers” crowd to say they want local food but then lead attacks against the long time farmers who clearly demonstrate what that buzzword sustainability really is about.  It’s also hypocritical to hear groups like the Center for Food Safety and Earthjustice state things that they support sustainable local food and then launch the “right to know” platform.  If these so called activists, gardeners, surfers, bikini clad chics, and environmentalists truly wants a sustainable local food supply, they’d get out of the way and work together with people.  What we are seeing is that their intentions are far from being genuine, and they choose to contradict every word they say by each action they fuel and instigate based in fear and not facts.  These people apparently forgot the old adage, “Actions speak louder than words.”