As a kid, our parents want us to hang around the good kids.  If you get in with the good kids, it also makes you look good and stay away from trouble.  Who you hang out with is a reflection of one’s own morals and values, as well as your family.  No one wants a kid who’s a delinquent.  In today’s modern world, that lesson is quickly forgotten as millions have decided to hang around and share some bad information from a not so truthful guy who made a lovely threat asking his followers to kill those who support biotech.  Do you hang around those delinquents?  Remember that you are who you associate with.

It’s so not surprising that Mike Adams of the prolific anti-GMO Natural News website is resorting to calling for threats against those who support biotechnology.  He quickly set up a website, Monsanto Collaborators, hours before announcing this threat on Natural News itself.  He has been a huge proponent of fear mongering among the Hawaii anti-GMO movement here and it’s no surprise that he has a myriad of complaints being lodged against him with the FBI as a result.  This guy is an insult to most people’s intelligence but unfortunately, so many activists in Hawaii love this dude who accuses biotech of crimes against humanity and so.  Many of the anti-GMO activists here share his hate for biotechnology and if you look further about how this vile huckster has overtaken logical and rational thoughts, all you have to do is look at how well entrenched he has made himself.  Let’s take a closer look at how intertwined ALL of the anti-GMO groups are to this deranged fellow that has swamped over the internet.

This site is full of untested health food claims and GMOs are dangers quips.  It’s a typical anti-GMO buy this latest health food and hate GMOs because it’s gonna kill you site.  And it too loves Mike Adams!

The Babes Against Biotech

Want good science from the Babes Against Biotech?  You’ve got it.  Straight from Natural News itself right on their site that touts “their resources!”  Now we can see why so many of their followers keep thinking that every disease on earth is caused by Roundup and GMOs.  Thanks Mike Adams!

How is Food Democracy Now tied to Natural News? Well, he touts their petition on his page too and wants people to sign it!  This bogus site is chock full of Agent Orange memes, GMOs are killing you, you are dying, and so on kind of information. Mike Adams loves helping these folks out!

Let’s look at Vandana Shiva and how she’s related to Mike Adams.  We find that she is even touting his page on her site, SEEDFREEDOM, which she quickly removed but is cached on Google for now.  It’s just a reminder that she too touts this kind of vile attitude towards those who support biotech.  She has made many a visit to Hawaii to spread her vile love in our islands thanks to many mainland funders of a supposed “grassroots campaign!”

Just another lovely reminder that she not only supports violence towards biotech supporters but she also calls farmers “rapists.” Nature lovers are such lovely people inside.

The Center for Food Safety

Then let’s see if Center for Food Safety is linked to Natural News and it sure is.  Mike Adams loves their anti-pesticide messages that he adds to his pages too!

So when all these anti-GMO groups are put together we get their followers in Hawaii touting it left and right on those GMO Free groups across our islands.  See how much they love this site!

The Hawaii GMO Justice Coalition has sought Natural News out to call for their massive protest too.  Note how they portray genetic engineering as a “crime against humanity” back in 2012. 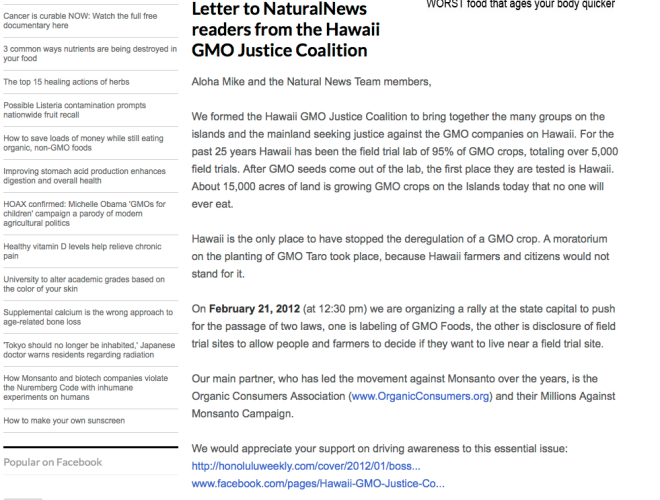 GMO Inside is yet another non-stop pusher of “label it” and “GMOs are killing you” kind of repetitive messages.  Their latest tirade is that Starbucks is killing you with their GMOs and who do they use as their source of information?  Natural News of course!

GMWatch is a Canadian based anti-GMO group that is hell bent against Monsanto, just like Natural News is.  And why shouldn’t they be?  They share his information too!

Jeffrey Smith and the Institute for Responsible Technology

Jeffrey Smith, the flying yogic of the movie, Genetic Roulette, is also featured on Natural News Health Conspiracy Radio.  How could he not be a part of Mike Adams’ tirade or paranoia across the internet?!  He’s an essential component to all of this fear!

Not only does Mike Adams adore Jeffrey Smith, but the love affair is mutual with Smith featuring his honored friend on his own website complete with a video! 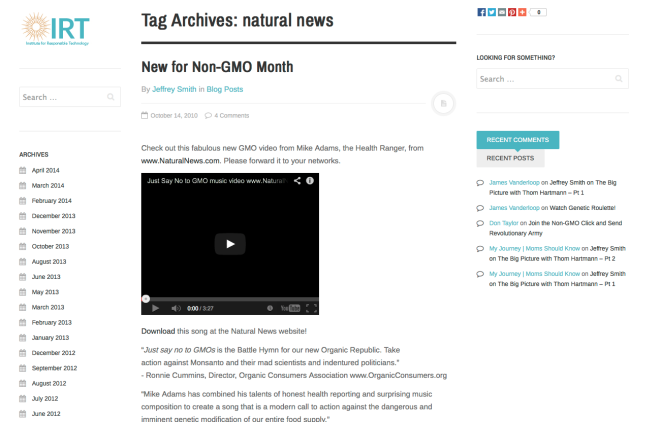 Here’s another local activist website based on Kauai that’s written by Ray Songtree called KauaiTruth.org.  When you look at the top of his page, you’ll see his love for the Babes Against Biotech and Hawaii SEED.  Go a little further down his page and you’ll see his “independent” sources of information and who is it?  Natural News.  Visit the GMO page and you’ll get more from Dr. Mercola, Dr. Don Huber, Vandana Shiva, Jeffrey Smith, and once again, Natural News.

Sustainable Pulse is now the go to source for the Babes Against Biotech because they’ve sort of come to realize that Natural News is a joke and have “tried” to change their tactic.  Nearly ever link on their Facebook page is from this “GMOs are killing you” site once again as everything else is pretty much debunked.  How are they connected to Natural News?  They do post stuff from them as “good and valid” information!

A huge pumper of bad information is the OCA, aka the Organic Consumers Association, led by Ronnie Cummings, is also touter of Mike Adams websites.  Of course they will state that Natural News, Mercola, and the OCA sites are the most trustworthy when it’s written by Natural News itself.  (*major head bonk*)

Kauai Rising is yet another anti-GMO group here in Hawaii that tried to get a petition to add change the county laws but did not succeed.  They too support Mike Adams’ plethora of bad information.

The SHAKA Movement is just another bunch of folks who are off on another planet but really are in California.  I’ve written about them here earlier.  If you go to their website, you’ll find links to many of Mike Adams bestie, Jeffrey Smith, the anti-GMO brothers of the internet.  They are great at fear mongering too.

Natural News is an Internet Sewage Spill of BAD Information

It’s pretty evident that this belief that biotechnology is creating a “crime against humanity” talk comes a lot from Natural News and so many other sites that share his beliefs.  There’s no facts and the unwitting consumer easily gets sucked into its fear filled messages that they are being harmed.  That’s why we have a very vocal bunch of activists who are crying for protections of this perceived “danger.”  Take a look at how many posts from our very own politicians who spew Mr. Kill Biotech Supporters’ message and its clear that they all are drink from his cup of anti-GMO punch. 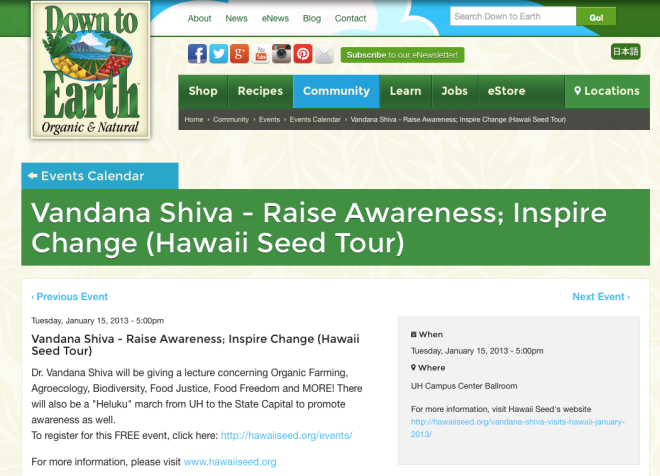 Down to Earth even touts Vandana Shiva, a supporter of Mr. Kill Biotech, through Hawaii SEED. 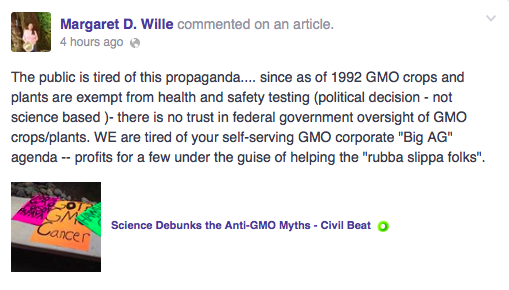 State Senator Russell Ruderman willingly aligns himself with activists like Mr. Kill Biotech and he’s pretty darn proud of it.

Even a Congressional Representative, Tulsi Gabbard, has read too much of Natural News from her funder, Down to Earth.

A State Senator wannabe, Terez Amato, also is believing in those health conspiracies that Mr. Kill Biotech touts. No wonder she thinks Thalidomide and papayas are related.

State House of Representative Kaniela Ing has also fallen in love with Mr. Kill Biotech’s message of “label it” with this review on the Hawaii Center for Food Safety Facebook page.

Former Representative Wooley herself spreads the same message that Mr. Kill Biotech repeats over and over again. A lawyer at that can’t tell bunk science from real science!

The Result of Poorly Informed Leaders= A Fear Mongered Public!

As you can see, even Hawaii leaders can’t even decipher bad information when they see it and nor do they do their homework. They too fall for the conspiracy theories and “we’re being poisoned” attitudes that are prevailing in the conversations around biotech and agriculture in our islands.  It shouldn’t be surprising at all that we see the same bunch of sites being shared among thousands and those thousands are scared, clamoring for politicians to save them from this perceived danger.  When you’re so afraid of something, you act without thinking, which means sharing bad memes and bad links. 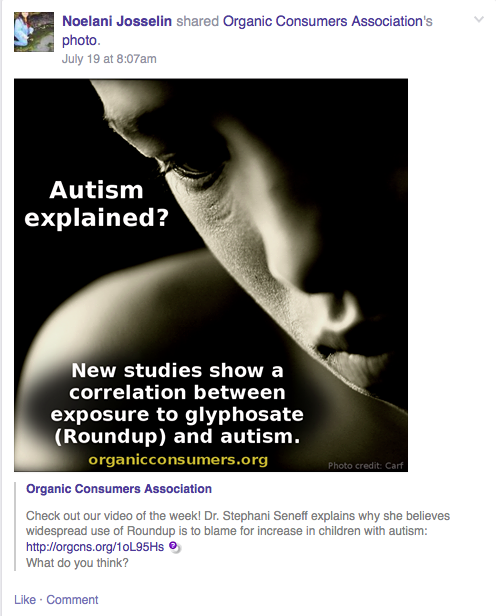 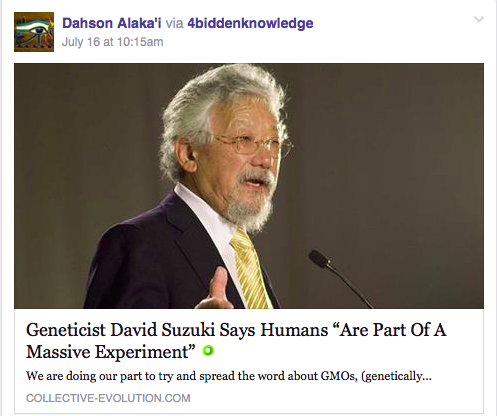 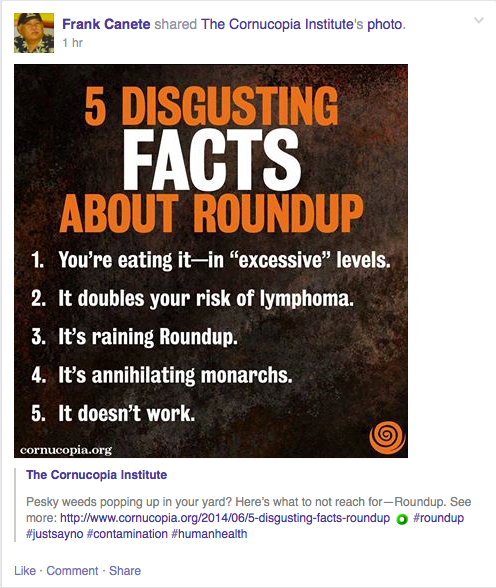 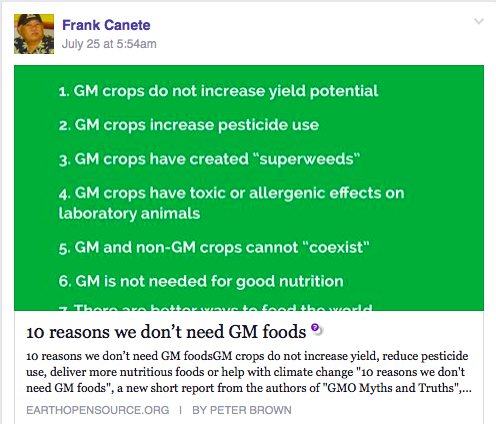 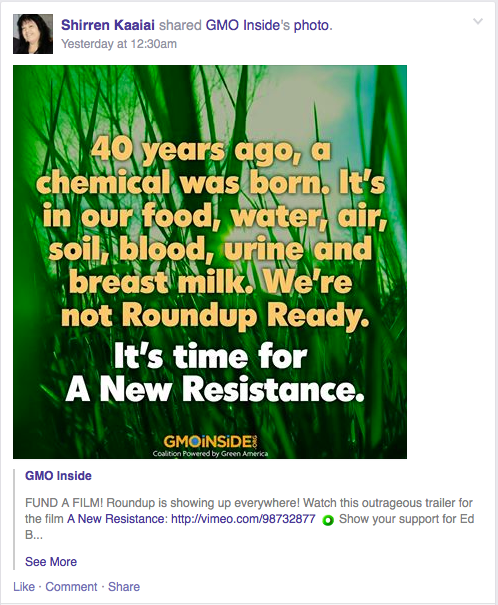 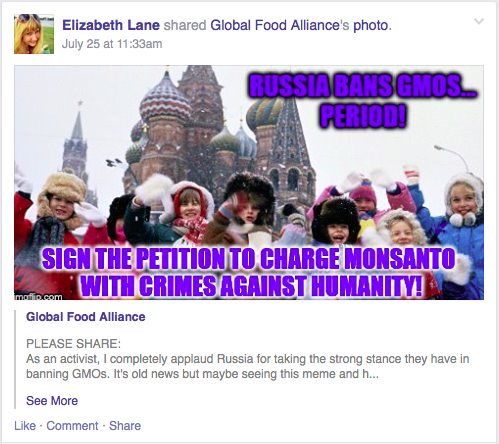 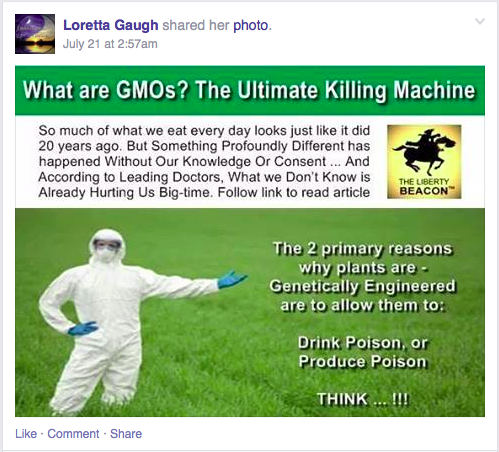 As once can see, we have a ton of bad information, poorly educated politicians and a public prone to supporting kooks like Mike Adams aka Mr. Kill Biotech, now using this to make laws.  No wonder those SHAKA Movement folks have somehow interpreted the Hawaiian gesture to no longer mean “what’s up friend” but “here’s the bird because I’m scared out of my board shorts.”  A vote for the moratorium also means that you support this guy’s deranged message that biotech supporters should be killed.  Do you really want to support that kind of messaging in our islands or are you willing to look further as to where you might be getting some bad information?  Please do the latter folks and remember that childhood lesson to hang with the good kids and not this bad egg.

If you’ve posted any of these websites, touted this information or even plan on voting for any of these politicians or the moratorium, you might just want to rethink your support of them.  Supporting them means supporting Mike Adams and his message to kill people like myself and other farmers, scientists, and agriculture supporters like the ranchers and paniolos who base our decisions on real evidence and support biotechnology as a tool for our future.  He has no aloha and neither do any of the people who back him up.  The mainland based SHAKA Movement folks need to use their new interpretation of it and SHAKA this guy out of the way of our islands.

Better yet, get a good idea of who is this really is…  A kama’aina or a kook?  You decide.

4 thoughts on “Anti-GMO Activists: A Family of Bad Information Delinquents Led By The Health Ranger”