It’s breaking news that the Kauai anti-GMO law has been invalidated by Judge Kurren today.  The law is pre-empted by the state law and cannot be enforced at the county level.  Joan Conrow and Richard Ha both did great blogs today on the news.

As I followed some of the news links posted on the various Facebook pages from Hawaii News Now, Civil Beat, KITV4, and KHON2, the commentaries are so disheartening once again.  I don’t consider this ruling a win in any case.  The damage has been done towards Hawaii agriculture, farmers, scientists, and our communities.  Our communities are not healed by this ruling that was started with a huge disinformation campaign by mainland based activists.  We are still divided and people are still not well informed about the issues revolving around agriculture here.

There has been so much fear mongering and misinformation that the public has been made to be so afraid of things they just don’t understand.  Bringing up they issue of biotechnology or even mentioning genetics or basic science turns people off as they have been indoctrinated to the belief that it’s “propaganda.”  How can we move forward when the largest and loudest voices are the least informed and still trying to dictate law? These are the same people who don’t understand how laws are made with to begin with or how the legal system works and now are asking for the judge to be impeached or even harmed?! 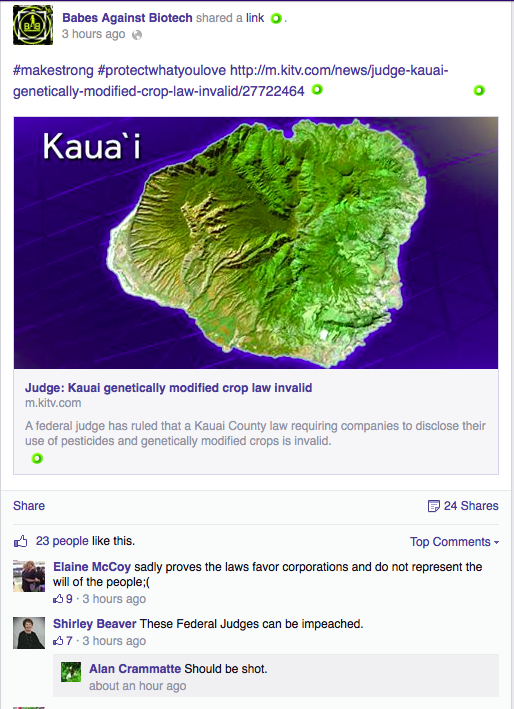 Screenshot from the Babes Against Biotech Facebook page. Note the disturbing commentary below.

These activists aren’t about working together towards a common goal unfortunately.  Just last week at a farmer’s rally on the Big Island, a long time GMO Free activist named Courtney Larson, was arrested and is being charged for disorderly conduct and other various charges.  When farmers are trying to figure out how to move forward after this devastation, and are at their most vulnerable state, the activists show their true colors and it isn’t pretty or full of aloha.  Is that what we need in Hawaii at a time when we have so many other issues to deal with and work through?

The activists politicians are also another group of people who are feeding this unaloha spirit in our islands.  From the likes of Russell Ruderman and his fear mongering GMO articles, to Mike Gabbard sending me links to the debunked Seralini study, to Kaniela Ing and his associations with “home rule” and the SHAKA Movement, to Gary Hooser and his alliances with environmental activists, our leadership is failing us as a state.  I’ve always been taught as a leader to check out your sources and do your research about the issue to base your decisions up and that you must use facts and evidence to move forward, not emotions or trends of the moment.  The leaders’ jobs are to keep the community together and cohesive so that it can operate properly.  When leaders like these choose to side with the loudest of the bunch but refuse to use facts or come to the table to discuss issues, it does no one any favors.  They should also be doing the work of educating others with good information so fear doesn’t dominate the conversations.  It’s pretty clear poor leadership has done a lot of damage in these recent years.

Judge Kurren has made his ruling and that has set the law today.  Do we choose to accept this decision or continue fighting and completely wasting our time and energy on this issue that further divides the communities? Or do we move on and work on the actual problems that we face like our high poverty rate, education, traffic, the increasing elderly population, homelessness, food security, and so on?  I hope that we move forward and actually set out to do something meaningful for the people in our communities and use our resources wisely to make it happen.  That’s my hope and expectation!