It is really disappointing but not surprising that Maui County narrowly passed the GMO initiative. It didn’t matter how badly flawed the law was, emotion and doubt prevailed in the end. That’s the saddest part about all of this anti-science movement. It has absolutely no basis in any kind of evidence, and is grounded in fear and disinformation repeated over and over.

I’ve encountered so many online discussions with activists to know that these people have very little to no knowledge of some key concepts involved in these issues. None could ever tell me anything about basic genetics let alone chemistry and biology. Neither do these folks understand the process of evidence based practice and lawmaking to fully understand the consequence of what they are voting for. That just tells me that we have a large percentage of people who read things off the internet and use that information to base their decisions off of. We have not given people the tools to decipher and critically vet what they read through our education process.

Apparently in Hawaii, on Maui County and Kauai County especially, the numbers show that quite a few voters have become swept up in all of this. The GMO initiative passed, Margaret Wille, Gary Hooser, Kaniela Ing, and Mason Chock get back in their political seats. The public still wants these people representing their interests and it’s disappointing. There are greater consequences when we as a society continue to take actions like this.

We’ve allowed groups from Washington, DC to dictate policy based in emotion rather than science and evidence. Just read an ad that the Center for Food Safety sponsored a few weeks ago. 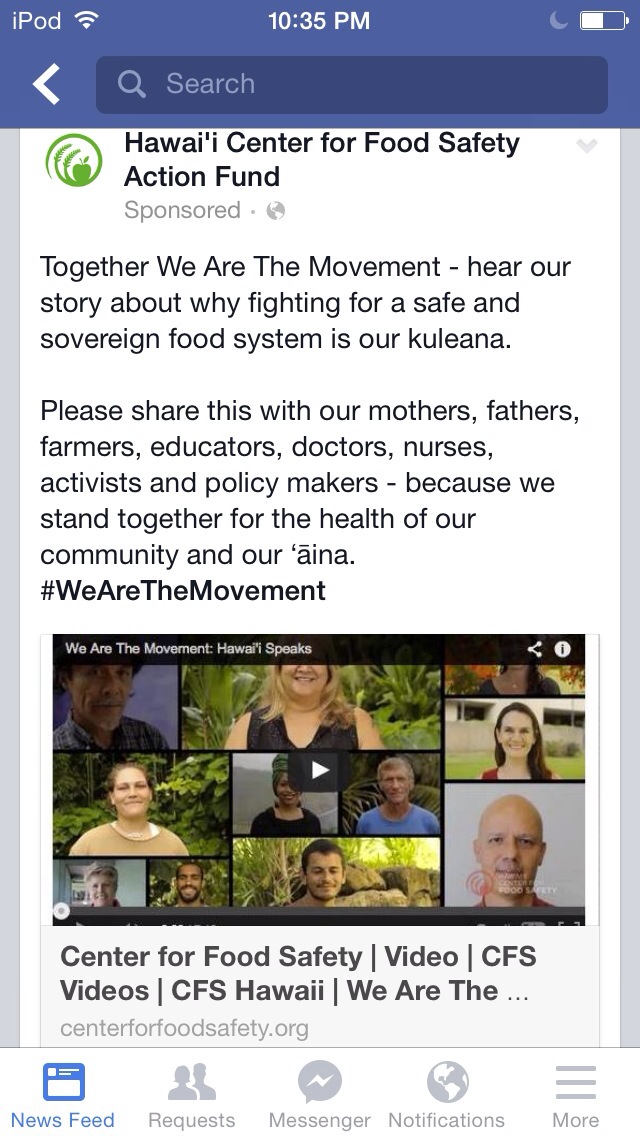 As you can see, there is no mention of utilizing science and research to grow this food movement. Meanwhile, the scientific community is preparing to address some dire consequences of climate change. Heck, Representative Chris Lee is hyped about getting Hawaii ready for it but then co-mingles with the Center for Food Safety! That’s ironic!

The rejection of science has also led to a growing outbreak of preventable diseases too. We just had two cases of measles a few weeks ago. It puts the most vulnerable at risk to these illnesses when we continue to reject the evidence. That is terrifying to me knowing that my kids could catch something that is so preventable.

I’m definitely not a proud of what has happened in Hawaii. It totally frustrates me that we have become an emotion based state rather than one who embraces science and technology. We are so isolated from knowing what is happening around the world and cling to the romanticism of the old ways yet quickly want the latest high tech device and drive the latest hybrid. Hawaii will still be that state I left 15 years ago as backwards as it is today with few to little opportunities for our educated generation of students.

Here we talk about growing Hawaii’s food supply and decreasing our dependence on imports but the take actions that move us away from it. What farm has activist Nomi Carmona and political science PhD Ashley Lukens started up here?

Neither have their roots in Hawaii either but somehow feel they know what’s best for local folks, which is typical of many mainland transplants. What have they grown and demonstrated that they want to help in this effort? They have done nothing but stand on their pulpits touting message that attack our farmers. They talk in idyllic terms of working together with the community, but aren’t sincere about it. It’s funny that both of them have blocked me on the social media, just like Russell Ruderman and others. How does one work with others when you’re not open to seeing the other side. It’s clear, they aren’t just like the rest of the activists.

The Shaka Movement and Center for Food Safety may be celebrating their short lived win, but ultimately, all of Hawaii has lost but can’t even recognize it.

5 thoughts on “Science Put To Vote: Falling Down a Slippery Slope”