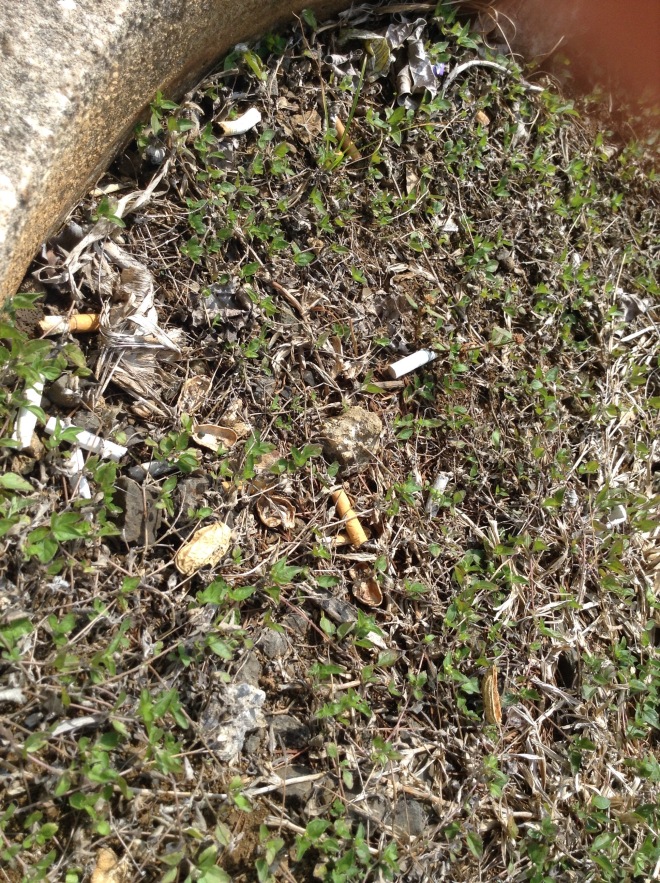 Today I decided to go down to the State Capitol to testify in opposition of the anti-farming, anti-pesticide HB1514. I parked in downtown with my infant son in tow and was walking near the Liliuokalani statue noticing all the people traversing there.

As I pushed my baby of 8 weeks in his stroller towards the handicap ramp, I noticed a slender, dark haired guy walking up also. He carried his backpack slung over his shoulder and was leisurely puffing on a cigarette as he walked. As I got closer, he stopped at a nearby planter to put out his cigarette. I recognized him as Dustin Barca, the former Kauai Mayoral candidate.

The hearing room was packed to the brim so I sat outside with baby and listened to the early testimony mostly in opposition to this bill. Eventually, I made my way into the room and sat down. As the hearing continued, Chair Tsuji called for all the neighbor island folks to go up.

This was the first time that I have had time off to go to one of these and what I heard really saddened me. There were at least 30 or so ordinary folks testifying of a host of multiple illnesses and a fear that they were being sprayed by pesticides. Klayton Kubo, a Kauai activist brought a dirty paper towel with the dust he wiped off of his louvers. Several of them shed tears because they were fearful of this alleged exposure to toxins.

Then there was good old Kauai County Council member, Gary Hooser, testifying on behalf of the council. He kept stating that small farmers won’t be affected by this bill. Sure, Gary, it won’t hurt small farmers when you don’t even understand what’s wrong with it and why the farming community is up in arms about it. Pushing a bad bill that lacks sufficient justification isn’t going to make some of us mad, it’s gonna make all of us mad. If you can attack one sector of ag, who is to say what’s next?

As I sat in the hearing listening to testimonies, I looked around at the supporters of this badly written bill. They looked like regular folks that were well fed and healthy looking. They all were able to afford plane tickets to fly over and had time off to do so. The common line that was stated over and over again was that they were afraid of being sprayed and toxins all around them. Some testimonies implied that the seed company employees were uneducated because they didn’t speak English well to their standards.

The best part of the hearing was hearing Dustin Barca go on about toxins and the horrible corporations. He even talked about the cigarette companies and their evils. It’s weird because I just saw him smoking some corporate grown tobacco and inhaling toxins. I had to scratch my head thinking about that.

These people mostly had no attachment to agriculture or even understand Hawaii’s roots. They see farms as nuisances and combined with no background in farming, they are ideal pickings by mainland activist groups like the Center for Food Safety and Earthjustice as well as the mainland funded Hawaii Seed. Spread some rumors about cancer, autism, birth defects, allergies and asthma that it’s all caused by living near GMO farms. Repeat that message over and over until they all believe it.

They are experts in manipulation and lots of people will follow and believe despite the data collected. One colorful testifier stated that he’d sic ISIS on the biotech companies! Another mentioned a cosmic vortex that swooped the pesticides up the mountain. A single mom of 4 was worried that she would not be able to have more kids because of the pesticides in the fields. The testimony was indeed interesting.

The sad thing is that if they get their buffer zones and disclosures, it’s obvious that these attacks will not end. It’s just a start. Attempting to divide agriculture with misinformation leads us down a slippery slope. Farmers big or small will not know what other baseless laws will come down and be on the defensive constantly. How will that achieve anything positive?

There full well may be illnesses but that hasn’t even been ascertained yet. That needs to be the starting point of any added regulation. Tests and studies have been done but these people are still not satisfied with the results. These people don’t trust any entity in government from the EPA, FDA, USDA, and state for that matter. It’s obvious that what has been done already is not satisfactory to them and they won’t stop until they get their ultimate goal, GMO Free.

I really feel that these folks would’ve remained level headed if they actually were walked through their issues and possibly educated on the basics of biotech. Instead, leaders like Gary Hooser and Ashley Lukens as well as others took advantage of these folks’ lack of knowledge and instill fear in. You never see their social media sites ever explaining why things did not go their way. They continue to fuel tirades of corporate corruption with no proof to back their claims. People are so afraid of science and technology as well as holding a deep distrust of government now which is perpetuated by these leaders. Ironic that they don’t government but then keep turning right back to them for help. Are they really going to change their feelings when they get their way? I doubt it.

I still await the day the activists’ resources were used to do what they feel needs to be done. History shows that they claim to work for protecting people but in action, they could do something but don’t. That’s the biggest tragedy in the anti-GMO movement here. 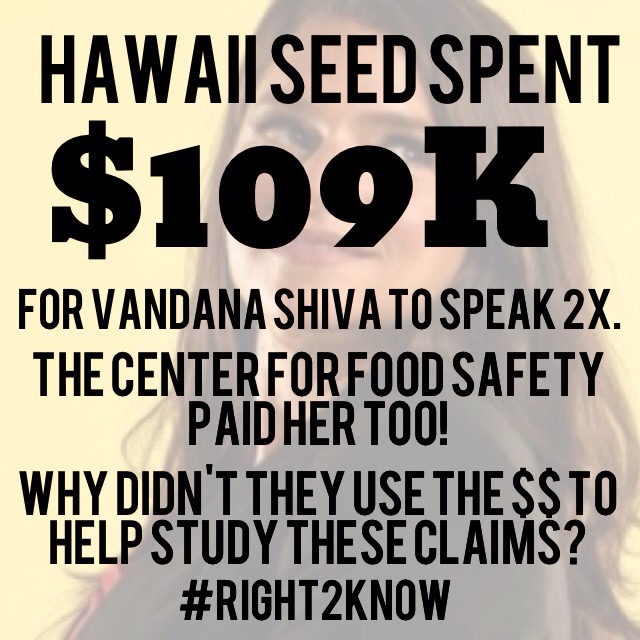