After sitting in the anti-pesticide, anti-farming House Bill 1514, I really have to wonder about the things that were being said in there. With the companion bill, Senate Bill 793, still alive, I have to wonder how much of what was being said would be believed by the committee members.

There were some really far out things being said but to someone who may not quite understand all the issues or how to debunk the claims, these things may become truth. I almost felt as if this hearing was not about why Hawaii needed to pass arbitrarily made buffers and onerous disclosures, but how much misinformation can you get in. The things being said ran the entire gamut of everything anti-farming.

One woman talked about the sea turtle study linking pesticide to tumors. She apparently misread the study as it had nothing to do with pesticides but with excessive nitrogen levels which they authors erroneously linked to farms. The study had multiple problems from a small sample size and flawed methodology that the conclusions were based upon.

Then there were worries of being infertile due to living by the farms. One testifier claimed that as a single mother of four, she was worried about not being able to have more kids. It’s likely that she read misinformation that GMOs cause infertility.

I’m pretty skeptical of all of the claims being made because it really seems all too well orchestrated. Joan Conrow blogged about Hawaii SEED’s plan last year after their own pesticide drift tests found nothing alarming. The Department of Health also ran multiple tests and found no cancer clusters or alarming levels of pesticides that would cause harm.

I’m not surprised that the whole thing around the need to protect my keiki bit was front and center. The Center for Food Safety set an entirely new website to coach folks on how to testify. Their goal was to have people attribute their illnesses to pesticides from GM fields primarily. Of course there was no hard evidence but nonetheless, having the claims repeated helps to ingrain the message or so they hoped.

Kauai County Council member, Gary Hooser, also pulled a fast one in the hearing also by interrupting the testimony claiming that the neighbor island folks had planes to catch and needed to testify first. They got in ahead of those who came early to testify. The truth was, they didn’t have flights to catch and they showed up at the labeling bill hearing at 2:30 pm. In fact, they even had enough time to have drinks at Nico’s around dinner time!

Despite the preferential treatment made for the outer island folks even though they didn’t need it, Ashley Lukens of the Center for Food Safety made a public complaint that the hearing was rigged. 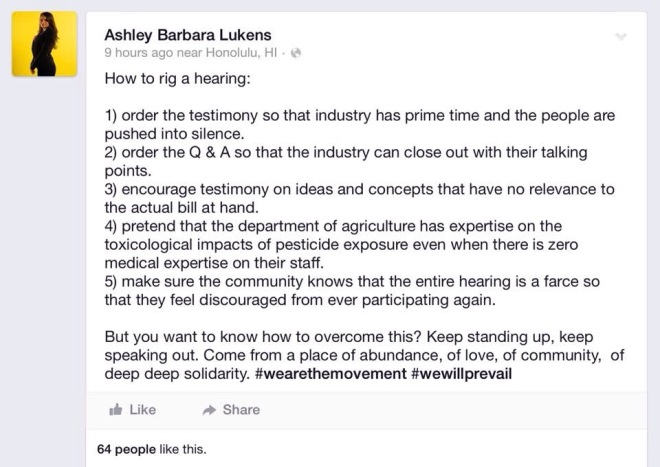 From what witnesses said at the senate hearing for the companion bill to this one, SB793, Lukens was going in and out of the Chair Josh Green’s office. On top of that, during the hearing Green was witnessed making winks at the activists and her in attendance. They appeared to have preferential treatment also but no one openly complained.

It’s pretty sickening to hear of this “it’s not fair” crying. No one from the ag community was going in and out of the Chair’s office of did any backdoor dealings to get a bad law put on the books. In fact, some legislators refuse to speak to the ag workers and some have even leveled their own accusations at them. None of us are photoshopping up memes to scare people. We do speak of fear of losing our farm land with badly written laws. We, as small farmers, are fearful of how much longer we need to keep defending our work from misinformation.

Lukens wants to play the victim card and make false accusations to hide the truth to her followers that their law was flawed to begin with. Never will you see the truth being stated by her or others. The best they can do is continue to misinform and play the “everyone is bought” nonsense. You can continue behind that facade that your intention was only to protect people, which obviously is not the truth when you target a selective group.

People can only stand the smell of bullshit for a short time and after awhile, it’s time to scrape the crap off.