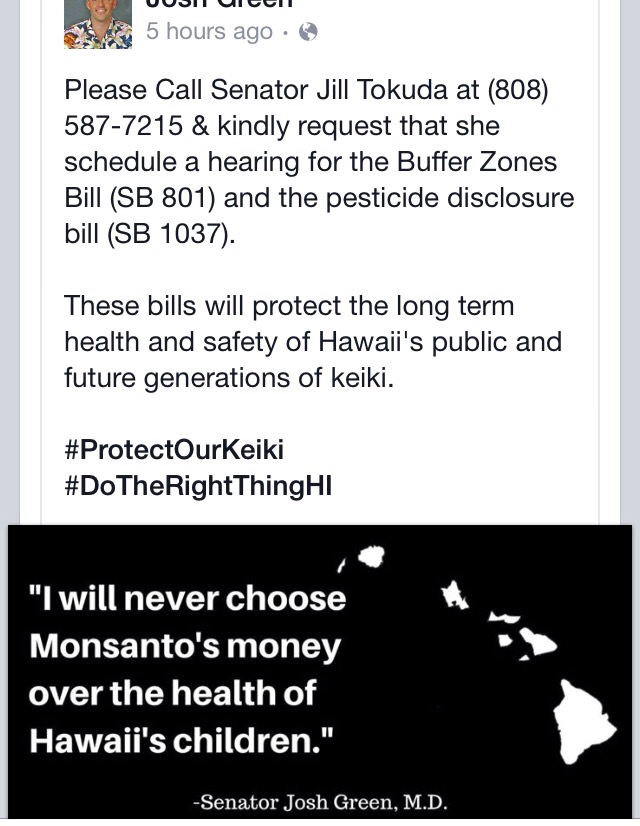 Once again, Senator Josh Green is the on my radar again.  It’s amazing that a senator no less is joining the ranks of those who want to send us back to an utopian agrarian society.  He’s apparently hell bent on supposedly doing the right thing.

Well, I’m starting to think that these pandering politicians don’t even have a clue of what the right thing is anymore.  At the SB793 hearing, he was cutting off his fellow senators questioning about the extent to which the law was needed.  Instead of letting Senator Thielen and Senator Chun-Oakland finish asking﻿ their questions, he rudely stopped them from getting their answers and kept the public from knowing the answers of the quantities really being used by all industries.

Not only did he cut off questioning, he rudely chastised Tom Matsuda of the pesticide branch of the department of agriculture for not having the figures of the pesticides.  If he sponsored this bill, shouldn’t he have gotten the numbers himself? He also shouted out that they use “gigantic” amounts, which is far from the truth.

As a leader figure, his arrogance and rude behavior is so disappointing for a public figure.  I teach my kids to be humble and respectful and here is a community leader showing how not to be.  I also teach my children to be honest when you speak and here he can’t even be honest. No wonder Hawaii is going down the tubes when leaders who should be held to a higher standard can’t even even be used as a good example.

The more I think about these poorly written laws, I realize that the passage of these aren’t going to do a thing for these activists and they know it.  They already don’t trust government and what they are doing with inspections and licensing.  Who is to say that a law is going to suddenly win their trust? They don’t trust the FDA, EPA, or USDA for that matter so why would they even bother to ask for a label from the FDA, whom they don’t trust.  The truth is obvious.

These people’s actions have shown that they have no second thought about being honest or even willing to come to the table to work with others in the community.  They can cut in line at hearings with bogus claims, exaggerate number figures, cherry pick studies, send death threats, make false accusations all over the social media, create fake websites and buy domain names, graffiti up the community, call for crop destruction, make wanted posters of pro-science folks, and so on.

While the activists are busy pointing fingers at everyone else not being honest and transparent, they forget that 3 more fingers are pointing at themselves.

One thought on “Do The Right Thing Hawaii They Shout!”