Apparently, politicians must be reading my blog because I just received this letter a few days ago. Representative Tulsi Gabbard is clearly misinformed when she states that GE ingredients need to be labeled and she’s using taxpayer dollars to achieve this.  (GE is a plant breeding technique, not an ingredient!). I’m not totally surprised that my own congress person is pursuing this as her own family has a vested interest in the health food market.  She has also received many contributions from the industry that stands to benefit from this kind of legislation.  Despite all of this, she’s not called a shill and is  more of a real shill than me!

The more I started thinking about this right to know, I realize why I take issue with it.  When people start demanding that the government be in charge of enforcing labeling of a product based on curiosity and not on evidence, it reflects upon a societal problem.  It really absolves the individual from taking personal responsibility for learning the facts.  The issue goes way beyond just the aspects of rights.  It amounts to a loud bunch of people who already don’t trust the government to regulate labeling.  I suspect that the labeling they want won’t magically gain their trust in any case.

There’s a lot of discussion that the right to know movement is being pushed by the millennials.  This generation is at least two generations away from the farm and really haven’t been exposed to what it is really like to work hard and to start from the ground up.  That’s is clear when you have anti-GMO leaders like Ashley Lukens, from the Center for Food Safety, proudly professing that she works a set schedule so that she can get her yoga hour in daily.  Must be nice to have the luxury of that “me, myself, and I” time in since her crops don’t depnd on her.  The sweat she makes helps only herself and doesn’t give back to anyone else.

Like Ashley and her GMOs means pesticides bit, the right to know folks are really quick to inconvenience everyone else for the sake of labeling GMOs.  They demand that farmers have to completely change the way they grow and harvest their fields.  It will cost them a significant amount of money to do this.  Not only does it add more costs to farmers, but also to food manufacturers who have to revamp all of their labels.  The government and the taxpayers will also be affected in needing to test or regulate the labels for accuracy.  The papaya farmers have to purchase little labels and be sure it’s stuck on properly or risk getting a fine.  Not only do farmers and food manufacturers have to modify their work but it will all land up costing the consumers, especially the ones who are most in need of affordable food.  Many will incur some kind of cost in the form of time or money because of someone’s curiosity and refusal to learn the facts.

I think a lot of this may stem from the way our children are learning facts in school.  There is a high amount of pressure for schools to score well on tests.  My daughter exemplifies this when she shows me her homework and asks for the answer to be given to her for her test.  Instead of thinking  the task through to figure it out, it’s easier to just be given the answer than to think.  As a mother who wants to enable my child’s critical thinking skills, I don’t give in to this.  I walk through the process with her to provide here with a foundation to help her.  Learning about life isn’t simply about getting an answer.

The world does not need more people who do not take responsibilty for their own learning.  America was not made because of people sitting around protesting.  The movers and doers were the ones to create their visions and dreams because they took initiative to do something.  We live in a great country because of great leaders who demonstrated the values of hard work and sacrifices and inspired others to do the same.  We have a reaped the benefits of those innovations.  It’s sad in this day and age that these values are not encouraged by leaders like our own President to even Representative Gabbard.  I just don’t get that sense of inspiration from our leadership at all.  What do we teach our young people when we don’t listen to those doing the real work and choose to listen to the squeakiest wheels?

I get really irked with this kind of attitude pervading our society.  Why are people not taking some responsibility for themselves? From the college student who takes our $200k in student loans to pursue a degree that could never land a career to pay for it, only to default on it.  The information on the degree you’re pursuing is available and not doing your due diligence ahead of time costs everyone.  It will take resources from those pursuing real careers who did their homework and kept their word to repay the loans.

This same absolving of responsibility is also seen in interns who tells their instructor that they didn’t learn a certain skill in school when asked to perform.  Instead of actually initiating a simple question of how one can prepare for the internship, they simply take cop out of stating, “I didn’t learn that.”  These people want to have their hand held to become skilled and are not able to take their schooling and figure out how to apply it in practice.  That person tries to make it someone else’s problem that they didn’t take the time to learn how to apply the knowledge provided to them.

Even the anti-GMO professor at UH, Dr. Hector Valenzuela, shows the same  behavior of not owning up to his actions and now stating that he’s the victim of harassment.  He proudly joined along with the Babes Against Biotech and shamelessly Marched Against Monsanto in Waikiki.  Neither he or any of the BAB members bother to tell their followers that Natural News or Dr. Mercola was not well vetted information.  They simply stopped posting it when I pointed it out that they tout pseudoscience.  Both Hector and Naomi Carmona never apologized or have ever owned up to all the harassment they incited against farmers like Dean Okimoto or even our state senators for the past few years.

Avoiding responsibility is clearly seen by the anti-GMO activists who have made hateful statements on the social media against anyone who speaks up against them.  When I would across these uglies, I’d screenshot it and repost it. If they can say it, they should be held responsible for what they say and do.  The funny thing is that when it’s reposted, these people call it slander.  Excuse me but if you post it, own up to it or don’t even even post it.  When it’s pointed out to them, they again try to justify their behavior by saying that the pro-biotech supporters have done the same so it’s okay for them to do it.  I ask them for evidence of this and have yet to have them reply back with anything. (Apparently to the anti-anything crew, it’s a monkey see monkey do world, and it’s just not their fault.)

The worst thing about this right to know movement is that the backers of it are ready and willing to deny the basic needs of food to others.  They feed people with illogical reasons as to why Golden Rice is not needed.  I’ve seen some Hawaii GMO Free members say that vitamins are better or just grow carrots or leafy green to prevent vitamin A deficiency.  If the answer was so simple, why hasn’t it been done yet? These people must not grow things either to realize why this isn’t feasible.  I bet they don’t even have children to know why fortifying rice is the most viable option in these countries.

With so much information available to us, the right to know movement really amounts to people who really aren’t willing to truly do their homework on what is and isn’t modified.  It’s way easier to be fed the answer in the form of a label than to actually sort through fact or fiction.  This kind of thinking only discourages taking responsibility for one’s own behavior and encourages taking the easy route.  Simply reading something on Google and joining a march fulfills their idea of saving the world.  Your right to know shouldn’t mean imposing on those who are the professionals with the right credentials behind them to choose the best tools available.  That right doesn’t give anyone a free pass at spreading misinformation and posting hateful stuff against farmers and scientists either.  The right to know folks need to get off their butts and actually learn a thing or two from the right sources before they start asking others to bend over backwards for them.

One hour of yoga isn’t going to save the world, but dedicating your life to learning more about the world and seeking the truth is a much better investment for your own piece of mind and others that are impacted by your actions.  Learning inspires others.  Learning from those in the field is the best way to get an appreciation of the hardest workers.  Demanding your right via protests and petitions only shows the world that a country of abundance is full of selfish individuals who care only for themselves and what they are eating.

I am not defined by what I eat and nor should you. 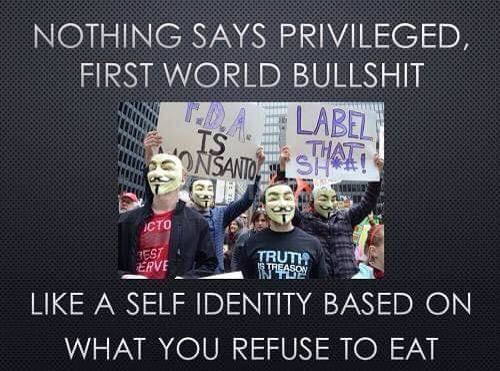