In just a few days, the World Conservation Congress will be convening in Hawaii to talk about the environment.  President Obama will also fly here and make an official announcement of the Papahanaumokuakea Monument expansion.  We are also in the midst of a tropical storm and a hurricane.  It’s a culmination of some interesting events but only telling of our priorities.

As an island state, we are highly dependent on outside sources of food and basic necessities.  It’s estimated that some 90% of our basic goods are imported because we can’t produce these necessary items here.  Not only are the local people dependent upon imports but so are all of the tourists that come year.  That includes all of the attendees of the conference too.  Everything from rice, bottled water, and even toilet paper tend to be hot ticket items when a possible storm hits us.  The canned goods also go flying off the shelf when we know that there might not be any food or power.

When we are forced to deal with the effects of Mother Nature, we won’t be turning to a tree hugger for our needs.  While environmentalists in Hawaii are celebrating the loss of ocean access to our fishermen, I mourn the loss of some of the most essential people in our state.  When there is no food, we will need to turn to those who are skilled in providing it.  They are the farmers, fishermen, and hunters of our islands who will be there to provide us with sustenance.

Every single one of us in Hawaii will turn to those that have their hands in the soil, oceans, or forests.  The farmers are the people who know how to use that soil to turn it into food.  They also have heavy equipment that’s very useful for unplugging flooded streams or moving large boulders.  Their large delivery trucks can help get food and supplies across the island to those who are in need.

The fishermen have the skills and know how to gather food from the oceans.  They have the gear to fish for those who can’t fish or feed themselves.  They also have boats that can help transport good across the state to other when other access points aren’t available.  These folks have amazing skills in catching food, but also traversing the oceans.  The fishermen can help provide additional rescue services if there is a need as they know the oceans like the back of their hands.

The hunters are skilled in knowing the landscape and forests.  They too can gather food from the wild animals and feed many people with their skill sets.  They know the terrains and the forests to recognize changes in the landscape.  When the markets have no meat, the hunters can set forth in the forests to find food for people who can’t.

So if that storm hits us, I hope that it’s a wake up call to President Obama and all the environmentalists celebrating the loss of fishing in Hawaii.  The environmental movement has decided to focus on taking away access and tools to the farmers, fishermen, and hunters.  It’s easy to do when you’re refrigerators are full and you’ve got all what you need.  Those who feed us can’t keep doing our jobs if we are faced with attacks that impeded our ability to preserve our ways of living.  What the tree huggers don’t realize is that when all is said and done, they will be turning to us to feed them.  All of the environmentalists depend on someone to feed them because they can’t feed themselves when worst comes to worst.

Even the politicians like President Obama, Senator Brian Schatz, Senator Mazie Hirono, and our Governor can’t feed the masses and have never fed the masses.  None of them have any skill set to turn that soil into productive land for generations or can turn to the ocean and feed hundreds of people with what they catch.  None have shown that they can go into the forests to find food to feed families year after year and for generations to come.  However, despite their lack of skills, they are more than eager to make policies that affect Hawaii’s ability to feed itself.

There’s something very wrong with the environmental industry in Hawaii when it sets forth to put those who feed us out of business.  The very people who have the skills and resources to nourish us deserve praise and appreciation for the hard work that they do, not demonization that have no factual basis.  When it comes down to the reality, you know that the tree huggers will ultimately have to eat and who will they turn to?  The very people they disparage.  Is that really the pono thing to do?

If someone tells you that the farmer, fisherman, or hunter are just terrible people, before you believe it, ask that person if they can feed you.  It’s most likely that the person saying those things can’t ever feed themselves.  It’s about time that we realize who we really need in Hawaii.  If that tree hugger isn’t feeding you, should they be the ones taking away the way of life from those who actually are?

Environmental policies must be evidence based and should never be used to take away resources that feed the population without good reason.  The green movement has to stop misinforming people and either show a better way to do this or get out of the way.  When there is no food, you know that you’ll be turning to those who are providing the food. 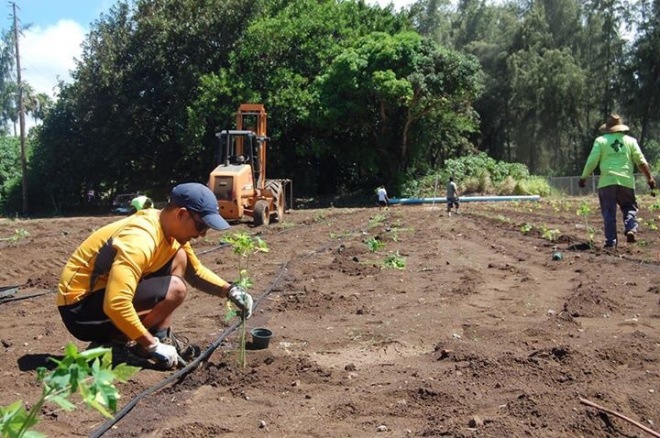