Dr. Marion Nestle referred to the film Food Evolution as “propaganda” and the other activists like Zen Honeycutt and the Food Babe are jumping onboard.  This implies that the content was misleading, and meant to affect opinions using less-than-honest means. I was really shocked when 45 academic signatories wrote the letter calling the film propaganda from the agrochemical industry.

I’m glad to offer you a taste of that propaganda, or should I say, papaya.

The film’s first part shows a horrible battle that happened here in my home state of Hawaii.  Non-farmers and well-financed mainland activists wanted my family to abandon a technology, the virus-resistant papaya.  The papaya was made resistant by genetic engineering, and it was done by universities and government to help the local papaya farmers. It was not the “agrochemical industry”.

Mainland activists riled up local agitators by carefully crafting a massive fear campaign in our communities and manipulated a vote against the papaya. Claims were made that it was poison, it caused tumors, it was increasing pesticide use and more diseases in the industry.  None of this was true, but in fear of retaliation, the majority of the council voted to ban it anyway.

The Food Evolution film crew was in Hawaii because it was the important national story at the time. They covered the story in great detail and presented it as it unfolded, giving plenty of time to the papaya’s opposition.

It also shows how farmers pushed back, and Margaret Wille and the County Council then grandfathered the papaya in, even though they believed (the propaganda) that it was carcinogenic and harmful.

They were caught in a hypocrisy when one tells the public improved fruits are dangerous but then exempt them with pressure.  This is fact.  This is hardly propaganda. The papaya works, it saved an industry, and is outstanding technology.

So it is very disappointing to me that Nestle, Pollan and 45 others go on record calling this story agrochemical industry propaganda, when it is a far cry from the truth.

It is especially disturbing because many of the people that refer to my family’s livelihood as propaganda are graduate students and professors. It seems like a bad career move to call the chronicling political resistance to successful technology agrochemical industry propaganda.

It is even more troubling that these are students and professors that claim to be in favor of small-holder family farms and sustainability.  The papaya allows my family to sustainably produce a local staple that would be gone if it was not for the technology.

If I was a student or faculty member I would think carefully before signing my name to a movement laden with false claims. It seems like the academic road is very difficult today, and when a search of your name shows you standing up against technology and small family farmers, it seems like a short-sighted career move. Your name on that letter symbolizes the rejection of science and the benefits it can have for small family farms globally, who face climate change and it’s consequences.  Do you really stand against that reality?

If you ever are over in the islands please let me know and I’ll personally introduce you to our “giant agrochemical industry”, which is me, my family and two dedicated farm workers, growing a delicious and valued fruit. The movie Food Evolution told our story, our fight, and our ongoing success very accurately.  I would think very carefully before calling my family’s reality throwaway propaganda. 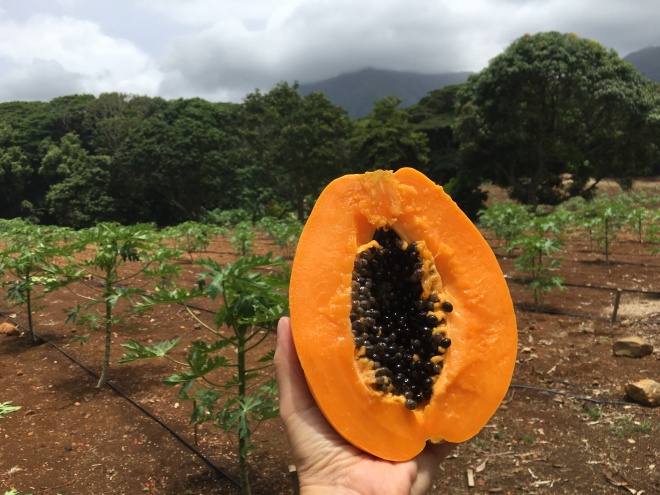 2 thoughts on “A Passion for Papaya is Not Propaganda”