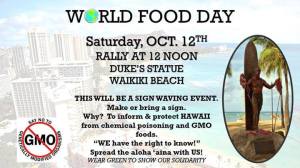 If you have spent a minute on the social media, you would have heard that tomorrow is another March Against Monsanto in Waikiki and worldwide.  Many misguided folks will be getting ready today for that planned march against this so called “evil.”  The Babes Against Biotech are planning a flash mob and busy choreographing something during this social event to protest this perceived enemy.

Meanwhile, there are people in this world who still go without food.  That includes many people here in Hawaii.  The homeless, elderly, poor and others await to get their food from the local IHS, Meals on Wheels volunteer, or the Hawaii Foodbank.  The needy folks look forward to a hot meal over an empty stomach any day and don’t turn their noses up in disgust over what it could be.  What hungry person ever turned away a good meal? Many volunteers will be serving the these people food marching up and down kitchens or sidewalks to get to a hungry recipient.  Others maybe organizing bags of donated food to be handed out to a family, who doesn’t pull out the items and scrutinizes every label or fret about pesticides.

The farmers will also be working on this weekend preparing for next week’s crops and getting their fields planted too.  There is no time to stop and learn a dance, print flyers, paint signs and gather up a costume for an event like this.  Growing food is a never ending cycle that requires lots of time and effort to come to fruition.  Time is valuable to them to do the work they do year after year.  Their marching will be to the tractor in their shed to get it ready to plow or down the field to check the irrigation lines.

So while it is proclaimed across the social media that there is a March Against Monsanto once again, the real people who care about others will be busy at their tasks.  Good will and good intentions will be far more reaching that a march could ever do.